Ride-hailing is finally launching in Metro Vancouver after Uber and Lyft were approved to operate in B.C.’s Lower Mainland on Thursday, ending years of delays for the transportation services.

Both companies could have drivers on the roads Friday, with Vancouver Mayor Kennedy Stewart announcing that city staff had approved business licences for Uber and Lyft.

Plans for an intermunicipal licence are still in development. “Almost all the Lower Mainland municipalities are on board with this. There’s a couple that still are outstanding, however they are always welcome to join,” he told reporters during the monthly meeting of the Vancouver Police Board.

Mr. Stewart said Burnaby is issuing its own licence, though he said the municipality could join into the regional process.

Uber and Lyft plan to announce initial operating areas shortly. Besides the Lower Mainland, they are also able to operate in Whistler.

B.C. Minister of Transportation and Infrastructure Claire Trevena had said she expected ride-hailing services to be in operation by this past Christmas, but the provincial Passenger Transportation Board (PTB) only approved one application – for a company operating in Whistler and Vancouver Island – by that time.

Mr. Stewart said there has been enormous pressure to get ride-hailing in place. “I understand the province wanted to get this right and their prudence was good because we learned a lot.”

Vancouver Police Chief Adam Palmer said Lyft and Uber “will be great for the downtown core” because they will offer a means for people in the Granville entertainment district to get home when they cannot find cabs. “We don’t want people to be driving impaired.”

A pair of Canadian companies, Kater and ReRyde, had their applications rejected by the PTB.

In its decision on Kater, the PTB concluded the B.C.-based company’s revenue projections were unrealistic and that it hadn’t properly accounted for market competition. Kater operated briefly under a hybrid taxi-app model in Vancouver last year, and the PTB said plans to charge rates close to taxis would put it at a further disadvantage.

Corrie Larson, Kater’s director of communications and marketing, disputed that conclusion. “To question the financial projections of a locally owned and operated company that has been providing different levels of service into the Vancouver market since March of last year is difficult to comprehend,” she said in a statement.

ReRyde also failed in its bid to serve Vancouver Island and the Okanagan, with the PTB saying the company’s business plan “fails to demonstrate a comprehensive understanding of the passenger transportation business in this province.”

Director of operations Jamil Chaudhry said ReRyde was disappointed with the decision and planned to reapply for a licence.

“What I really see in this decision is the board hasn’t done a really good job in reading through the applications,” Mr. Chaudhry said, adding the company hadn’t heard from the board since November.

ReRyde has “been operating in Manitoba successfully for almost two years,” he said.

The PTB has now completed reviews on six of the 29 ride-hailing applications it received. Addressing criticism about delays in the approval process, the board pointed to the large volume of applications and said it is hoping to issue further decisions as quickly as possible.

The arrival of Uber and Lyft comes amid increasing global pressure to classify drivers as employees. California has passed legislation to increase labour protections for gig-economy workers, including setting minimum wages.

Uber has warned that reclassifying workers would “have an adverse effect on our business and financial condition.”

In a statement, BC Federation of Labour president Laird Cronk said: “We welcome ride-hailing to B.C., but we will continue to stand up for drivers and call on the Passenger Transportation Board to collect and regularly publish data on the earnings and conditions for drivers.”

As Share Now exits Canada, its users struggle to plug the gap
January 5, 2020 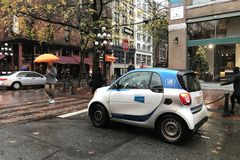 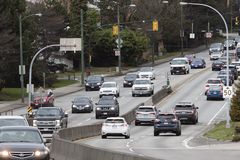