Drug-user advocates on Wednesday erected an unsanctioned overdose-prevention site in Maple Ridge, B.C. in efforts to avert overdose deaths and put pressure on the local health authority to open a permanent facility in the city.

As several police officers looked on, a group of dozens laid down plywood next to a supportive housing facility and assembled a white tent. A lawyer with the Pivot Legal Society on-site made a case for drug users’ Charter rights.

Chris Bossley, an advocate who last year ran unsuccessfully for Maple Ridge City Council, said the group is calling on Fraser Health and the B.C. government to open a site immediately.

“Until then, we will operate this overdose-prevention site right here, on this provincially owned land, as a safe site for people vulnerable to overdose fatalities, 24 hours a day,” she said.

It was unclear how long the site would stand; by late afternoon, police seemed poised to make arrests for mischief.

Tensions in Maple Ridge have escalated in recent years because of passionate disagreements over how to address issues of drug use and homelessness.

The tent city dubbed “Anita Place” was born as a denunciation of unaffordable housing, growing over two years into a home base for the city’s homeless and drug-using population.

Its residents fought two legal actions to evict them before an evacuation order was enforced in early March, after several fires exploded propane cylinders and threatened residents’ safety.

Advocates assembling the unsanctioned site on Wednesday said Anita Place served as a de facto overdose-prevention site, with residents looking out for one another in the absence of a legal facility. They invoked the name of a man dubbed “Mohawk Jay,” whose overdose death in mid-April they attributed to the camp’s closing.

After council rejected a supportive housing proposal for Burnett Street last year, the province stepped in and said it would proceed with 51 units of supportive housing on the property – drawing the ire of residents who protested what they viewed as a heavy-handed approach.

Amy Gilbert, Mohawk Jay’s partner, said that he was a good person who felt ashamed of his drug use, but found some sense of community in the tent city. On the day that he died, he had used alone, in a ravine. “He used alone because he was ashamed of the stigma and how everyone treated him,” she said.

B.C. rapidly expanded overdose-prevention sites as fatal overdoses soared in the winter of 2016, with then provincial health officer Perry Kendall saying he believed the province could be culpable for deaths had it not taken such actions.

Fraser Health says it currently offers overdose-prevention services within two housing projects for residents, and other people who use drugs can access witnessed consumption through outreach services provided by Rain City, according to spokeswoman Tasleem Juma.

Maple Ridge Mayor Mike Morden said the group has a history of carrying out business with no regard for authority. “Is this democratic? No. It’s just not acceptable. If the community decides it needs [an overdose-prevention site], there’s a process.”

A few Maple Ridge residents opposed to such sites showed up to observe Wednesday’s action. Among them was Kym Handsford, who said she was a “full-fledged crystal meth addict” living on the streets more than 20 years ago and believes she would have continued using, and eventually died, had she been offered the housing and overdose-prevention services she views as enabling.

On Wednesday, the BC Centre for Disease Control released a report finding that the province’s rapid scale-up of harm-reduction initiatives such as overdose-prevention sites – along with naloxone distribution and expanded opioid-agonist treatment – is believed to have averted around 3,000 deaths in a 20-month period.

“This study speaks to the importance and the effectiveness of harm reduction and treatment efforts and the fact that they save lives,” said Judy Darcy, Minister of Mental Health and Addictions, in a statement. 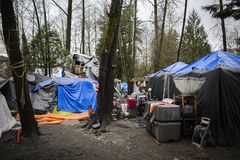 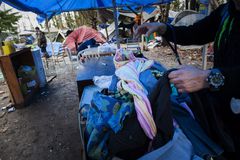