Vancouver artist Georgia Youngs was lying in her bed, panicking. It was early in March, and the COVID-19 crisis had shut down the classes she taught to more than 80 students. The 75-year-old painter, who lives alone in a bungalow in the west side of the city, didn’t know what she was going to do with herself in self-isolation.

Then an idea that had first jumped into her mind in January resurfaced: a project that would pay tribute to the Group of Seven, who had their first formal exhibition 100 years ago. As an artist, she’d long admired the group – they’d been an inspiration to her as a young painter – and she wanted to recreate their iconic Canadian landscapes as a way of honouring their legacy. Ms. Youngs thought of the project as an artistic exercise that would keep her busy and focused during challenging times, but she discovered something else over the months that followed – that in a way she might never have predicted, the Group of Seven have plenty to say about living through a pandemic.

When Ms. Youngs woke up on her first day of isolation, she rushed downstairs to her studio, took out all her canvases and started applying her paint. The first work she did was a recreation of a favourite painting of hers: Tangled Garden, by JEH MacDonald of the Group of Seven. It shows a cluster of flowers in vigorous colours, with a tall sunflower flopping against a wall of a wooden shed.

While she was replicating the riotous splurge of colour, she found herself thinking about the pandemic. “Things were very chaotic,” she said. “We didn’t understand things. We couldn’t see our way [forward].”

When she finished that work, she took on another piece she deeply loves: Woodland Water Falls by Tom Thomson, who is often considered an unofficial member of the Group. She felt “calmer” right away.

“I thought, ‘Okay, I have a plan; I have something to work on.’” Since then, she has recreated 17 other pieces by the Group of Seven, including several that she’s found speak to her about the current upheaval. While working on A. J. Casson’s Housetops in the Ward, a work depicting brightly coloured rowhouses covered by snow, she found herself thinking about the concept of quarantine: People are isolated in their homes, and yet they’re connected.

When she was drawing Lawren Harris’s Return from Church, she considered the churchgoers – men in top hats and women in long coats and fur shawls – walking in small groups through snowdrifts in front of a building and burst out laughing: “They are social distancing!”

Ms. Youngs says she hadn’t paid much attention in the past to the historical era that the Group of Seven found themselves painting in. But when she looked up the year Tangled Garden was created, she realized it was done in 1916, in the middle of the First World War.

“They were all struggling. Personally, financially, emotionally…This is very much what we’re doing now,” she said, noting that the artists left an amazing legacy of art through their fortitude, strength and love of the Canadian landscape. “I’d look on their work and think, thank you. Thank you for doing this for us and thank you for helping me through this pandemic that we’re going through.”

Ms. Youngs sits in her studio every afternoon for about three to four hours and immerses herself in these artists' world, studying their work brushstroke by brushstroke, colour by colour. She counted the number of clouds in Arthur Lismer’s The Sheep’s Nose to ensure she was replicating it accurately and the number of leaves and branches on a tree in Franklin Carmichael’s October Gold.

The intense concentration has made living through the pandemic easier.

“I was able to escape into this bubble … nothing touched me.”

Often, she says, she became so focused that she found herself imagining conversations with the artists. “How did you get these angles? Where were you standing? Do I need to spend any more time with this?” She threw such questions in frustration to Mr. Casson when painting Housetops in the Ward, because she couldn’t get the angles of those rooftops right.

His reply? “If you just do this, just spend another day [or] two working on this, it’ll just get much better.”

The project has helped Ms. Youngs endure months of isolation; It also became good news for many of her students, who also suffered from a lack of connection.

The majority of Ms. Youngs' adult students are single older women who are in their 60s and 70s. For many, their 2.5-hour painting class was the focus of their week, but the pandemic stole that from them.

When Ms. Youngs began documenting the process of hand copying the Group’s artwork on social media, her students began to feel connected again.

Bev Rossoff, 69, was a follower of this project online.

“It just was very joyful to see her work on that,” said Ms. Rossoff, who has been learning painting with Ms. Youngs for about four years.

Ms. Rossoff didn’t step out of her home in Richmond, B.C., for months, until one day in the summer, when Ms. Youngs finally resumed her classes in her garden, under safety protocols.

“I was relieved when she decided to do this art in the garden,” Ms. Rossoff said. “It’s like going home to family.”

Over the course of the project, Ms. Youngs also painted a work of her own: a bunch of daffodils, a flower that symbolizes healing. While she was drawing her piece, she realized that she was using many of the Group’s techniques: the direction of light, the layers of colours and the style that is strongly influenced by post-impressionism. She named her painting Hope.

Ms. Youngs aimed to conclude the project with an iconic image. She stumbled upon Frederick Varley’s Stormy Weather, Georgian Bay – a lone pine tree standing tall on a cliff’s edge, even though it’s battered by wind. She said a sense of hope arose when she looked at the tree and determined to draw this piece.

“I thought this is what we are, as a country, being hit by so much. But we are still standing strong because we should have this hope that we’re going to come out of this and we will.” 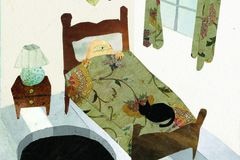