Vancouver’s only cemetery is thinking outside the pine box in its efforts to find space, become more environmentally friendly and make the graveyard an interesting place for the living.

Vancouver City Council has approved changes that would allow strangers to share grave spaces, could permit three or more bodies in one site, will establish a green burial option and would consider eliminating tombstones or markers.

Cemetery manager Glen Hodges said the changes could allow for hundreds of other spaces and keep the site operating in an environmentally friendly way.

“One of the concepts that we’ll be looking at for our green burial areas is also the notion of non-permanent markers," he said. "This notion that the body is buried and it naturally returns to the earth, that some people might be interested in having that same sort of return to the earth symbolized in their memorial or marker.”

He said if the marker was made of wood, over the decades it would erode in the same decomposition process as the bodies underneath.

Mountain View Cemetery has been operated by the city since 1887 and sale of new burial space in the 42-hectare site was shut down in 1986, but redevelopment began and the sale of internment space reopened in 2008.

While the city approved the bylaw changes, a cemetery committee that includes Mr. Hodges will still need to establish the expanded options.

“So, two or more strangers can share rights to what was traditionally one grave.”

Under the law, when a person is buried in a spot it is in perpetuity. Mr. Hodges said reusing or adding bodies would only be done with permission from the person authorized to make such a decision.

A previous city bylaw allowed two caskets in the grave site within a 40-year period.

Mr. Hodges said a body takes up a lot of space and air when it’s buried in a traditional casket, far more than if a person is buried in a shroud.

“The volume of space in the ground that two caskets take could easily accommodate three bodies that are wrapped in shrouds, maybe even four. So that’s the kind of more economic and more dense use of that space that reflects in the economics of the grave.”

Many cemeteries require people to be buried in a coffin, and with concrete liners to prevent the ground from sinking above as the body decomposes.

Mr. Hodges said Mountain View is considering a more sustainable option where there’s no outer container, no casket and no embalming that allows the decomposition process to occur faster.

“We may be able to accommodate two or three or four burials of bodies in one typical grave within a time frame of 30, 40 or 50 years,” he said.

Stacking the bodies would mean going back into a grave site to dig further than the traditional “six feet” under to perhaps nine or 10 feet, Hodges said.

The idea of eliminating grave markers in place of a central memorial stone would also allow more areas of the perimeter to be used.

“Our gardeners are already starting to think about planting plans and how we can naturalize some of these areas and make them an interesting and attractive part of the cemetery.”

The cemetery stopped using herbicides and pesticides decades ago and doesn’t irrigate its lawns.

Hodges said cemeteries in Europe that are thousands of years old have been long been reusing graves because of limited space and the same issue is now becoming a factor for many cemeteries in North America. 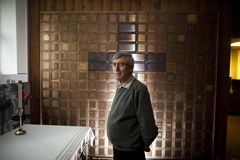 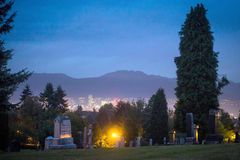