The Vancouver Park Board has authorized a conditional injunction to clear the homeless encampment at Oppenheimer Park, signalling a change in strategy after months of rebuffing calls to take action.

Park Board chair Stuart Mackinnon, whose goal this fall was “voluntary decampment” of the East Vancouver park, cited winter weather conditions as the primary reason for now authorizing the injunction.

“The temperatures are getting lower and people are getting colder,” he said Tuesday. “We are very concerned about people taking warmth into their own hands and bringing in things like propane heaters, which can be very unsafe in a confined area.”

Park Board general manager Malcolm Bromley is expected to seek the court order once a number of conditions are met. Those conditions include seeking an independent, third-party assessment of the encampment, with recommendations on how to provide support and seek appropriate shelter, and a revision to current bylaws that preclude people from sheltering in parks.

Mr. Bromley said the park board is in discussion with as yet unnamed Downtown Eastside groups about the role of a third-party partner.

“The group that we will work with will help us determine the best plan for decampment and will, in all likelihood, be part of the implementation of that,” he said.

“At this stage, there isn’t permanent, acceptable housing for everybody but we are working on shelter space that’s a better alternative to what we think, and the board feels, is an increasingly unsafe environment.”

The park board has no firm timeline for the decampment but Mr. Bromley said a broad target is the first quarter of 2020.

The park board will also seek to revise Vancouver’s Parks Control Bylaw, which currently prohibits camping and overnight sleeping in parks. Courts have struck down similar bylaws in other B.C. municipalities, saying they breached homeless people’s Charter rights to life, liberty and security of the person.

Mr. Bromley said the park board is seeking guidance from Victoria and other cities that have worked through the issue in assembling its own bylaw. Possible options include designating certain parks as camper-friendly.

The number of tents at Oppenheimer has fluctuated from a few dozen to upward of 200 every summer. Previous iterations also ended as temperatures dropped and first responders tallied up mounting fire and other safety hazards.

Despite there being more than 100 tents currently erected at Oppenheimer, park board staff estimate that only 30 to 35 people are sleeping there overnight. Most tents are being used for storage, Mr. Bromley said.

This past September, the park board, dominated by commissioners aligned with the Green and Coalition of Progressive Electors parties, voted against asking for an injunction despite a request from Mr. Bromley. As well, it rejected a request from Mayor Kennedy Stewart for the park board to temporarily hand over jurisdiction of the park to the city, which he said had greater resources to restore the park “to normal operating conditions.”

Mr. Mackinnon said then that an injunction that would force homeless campers from the park to back alleys was not a true solution, and that the city should create a multijurisdictional task force to address homelessness in the city.

Vancouver Police Sergeant Aaron Roed said Tuesday that the department supports the park board’s initiative to clear out the park and secure housing for campers.

“Our initiative has not changed, for the Vancouver Police Department,” Sgt. Roed said. “We are going to maintain a high level of presence within the park. Our goal is to provide a safe environment and protect the public [and] deal with any crimes as they present themselves.” 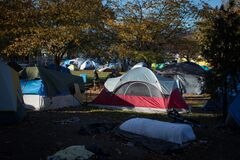 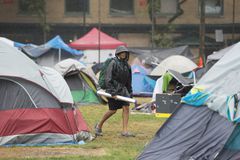 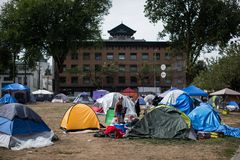