Reducing the number of people experiencing homelessness in parks and public spaces “to zero” is a key goal set out in a first such agreement between the B.C. provincial government, the City of Vancouver and the Vancouver parks board.

As part of the memorandum of understanding (MOU) announced Tuesday, all three levels of government have each agreed to do their part to ensure that the current homeless encampment in Vancouver’s Strathcona Park is cleared by April 30 and that no other such camps will be allowed to take hold.

“There is a commitment to the community that we’re not going to let another Strathcona Park happen again,” Attorney-General and Housing Minister David Eby said, warning that the long-standing problem of homelessness won’t simply disappear.

“If people think this means they’ll never see someone panhandling on a sidewalk, that’s wrong.”

The province has already started work on its commitments in the agreement by buying six hotels in Vancouver over the past six months, as well as arranging for multiple sites that will provide indoor accommodation that offers more private space than a shelter.

But the memorandum also specifies that the city and the park board need to each play their part in enforcing their bylaws related to people living in parks.

That’s something both Vancouver Mayor Kennedy Stewart and park board chair Camil Dumont are welcoming after watching the city go through years of turmoil as encampments with hundreds of people – first at Oppenheimer Park in the Downtown Eastside, and later at Strathcona Park since last July – have sparked public conflict.

The park board in particular came under fire for its position that it would not ask for an injunction to clear the camps unless there was a guarantee that there was decent housing for people to go to, while residents and police alleged that the camps were responsible for increased crime and violence in and around the parks.

With the memo in place, Mr. Dumont said, “I’m confident that by April 30, we will be very close to decampment.”

He declined to provide details on the strategy that park board rangers, working with Vancouver police, will utilize to ensure that Strathcona Park is emptied and that the encampment won’t simply be moved wholesale to another location, as has happened in the past.

“We’re preparing for a bunch of scenarios and are definitely trying to understand all the possibilities,” Mr. Dumont said.

Those currently living in the encampment could try to set up in another park, as when they were pushed from a site at the Vancouver port last summer, and vans and trucks were used to transport items over to Strathcona Park.

“There will be new events, but now we have a tool and a template,” Mr. Dumont said.

At the Strathcona encampment on Tuesday, people slept, chatted with friends, and moved in and out of a warming tent and a recently erected overdose prevention site. Red metal fences criss-crossed the park, delineating areas where tents were permitted.

Jules Pedersen, sitting outside a tent in the sunshine, said she had been living at the camp for about a year, after she and her partner lost their housing in a Surrey basement suite when their landlady evicted them in a process Ms. Pedersen alleges was illegal.

She said she had been talking to B.C. Housing staff about potential housing and hoped to learn soon if she would be able to move from the encampment into an indoor space.

Ms. Pedersen said she has felt generally safe in the encampment but has struggled to deal with the rain and the snow.

Fiona York, a long-time community outreach worker in the Downtown Eastside, is one of several people who have been working to ensure camp residents have much-needed supports such as showers and food, as well as assistance with determining whether to accept the housing they’re being offered.

Ms. York, who participates in the regular meetings held at the camp with representatives from the city, park board and BC Housing, said there is no sign that enough suitable housing will be available by the April 30 deadline outlined in the agreement.

She is concerned that many will end up being scattered again throughout the Downtown Eastside, without access to the services that have been built up in the encampment. She declined to say whether there was a plan among camp organizers and residents to refuse to move or to relocate to another park.

The province signed a similar MOU with the City of Victoria last month. 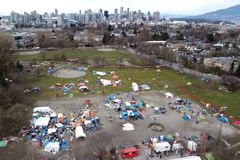 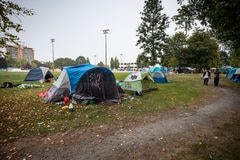 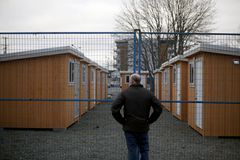 Follow Frances Bula and Wendy Stueck on Twitter @fabulavancouver @wendy_stueck
Report an error Editorial code of conduct
Due to technical reasons, we have temporarily removed commenting from our articles. We hope to have this fixed soon. Thank you for your patience. If you are looking to give feedback on our new site, please send it along to feedback@globeandmail.com. If you want to write a letter to the editor, please forward to letters@globeandmail.com.
Comments