The only hint of disarray visible from outside is in the Venetian blinds, drawn shut to expose every bent and broken slat through the living-room window. But inside the two-storey home, the chaos is apparent: the clutter strewn across the floor, the stench of waste.

Jonathan Gormick, a captain with Vancouver Fire and Rescue Services (VFRS), and Robyn Kelway, a social worker with Vancouver Coastal Health (VCH), are following up on recent overdose calls throughout the city.

The Combined Overdose Response Team, a new outreach initiative launching Friday, aims to deliver services to those who would otherwise be hard to reach, at a time when they’re likely more receptive to help. An outing during a trial period last week took the two to this suburban home, where a woman in her late 60s welcomed them.

“You’re probably wondering how it got like this,” the woman says. She wears a neat brown bob and red glasses that sit crooked on her face. “I went on a bender.”

The woman says she relapsed after three years of sobriety owing to stressful events in her life. She lives with alcoholism, an eating disorder and chronic pain, for which she was prescribed opioids.

Ms. Kelway asks the woman about services that have supported her in the past, about her access to a doctor.

“I think what I need is an alcohol and drug counsellor again, or a post-traumatic stress counsellor,” the woman says.

Ms. Kelway says she’ll make an appointment and be in touch. She leaves behind a business card, they say goodbye and the outreach team heads out to the next stop.

Vancouver firefighters’ annual overdose calls doubled over three years, reaching 5,000 in 2018, and those stationed in the city’s Downtown Eastside often spend entire shifts on these calls. The VCH overdose-outreach team, meanwhile, launched in May, 2017, to help connect people to addictions care and other social services. In the first six months of this year, the team supported 456 clients.

But there have been gaps: The outreach team has primarily taken referrals from emergency departments, but many overdoses are treated within the community and patients don’t go to a hospital, said Patricia Daly, chief medical health officer for VCH. Those taken to a hospital are often in withdrawal – having recently been administered naloxone – and are not receptive to talking about treatment.

Firefighters, meanwhile, often see the same overdose victims multiple times, but are limited in what help they can offer.

“It’s intensely frustrating when someone is struggling so badly and we can’t do anymore,” Capt. Gormick said. “The services are there – they’re obviously not accessing them – but that’s the limit of what we can do.”

Early this year, Capt. Gormick began work on an initiative to follow up with recent overdose calls, partnering with VCH to facilitate an immediate connection. Working from a list of calls coded as overdose/poisoning events, VFRS eliminated those that were primarily alcohol-related or had insufficient contact details, then twice a week set out to find the patients at the location to which 911 had been dispatched.

At each location, Capt. Gormick asks for the patient by name but says only that he’s following up on a recent call, noting patient confidentiality. If the patient is there and consents to further help, he then waves over the VCH social worker, who is waiting just out of sight.

During a four-week trial period in August, VFRS attended 593 overdose incidents, 131 of which met the overdose-outreach criteria. The Combined Overdose Response Team made 107 visits, making contact in 22 of them, with 21 patients consenting to further help.

Among them: A man in his 50s with an addiction to prescription opioids. (The outreach team provided his wife with a naloxone kit and taught her how to use it.) A woman in her 20s who had expressed a desire for treatment upon discharge from hospital, but had no contact information to leave. (The team got her into treatment the next day.) And an 18-year-old on the brink of aging out of care, who asked for help in securing alternate housing.

“We don’t always have the ability to contact someone, but when we do – which is what this initiative allows us to do – most people want to be connected to healthcare services,” Ms. Kelway said.

Dr. Daly noted that a review of fatal overdoses in B.C. in 2017 found that 59 per cent of those who died had sought treatment for substance-use disorder. Among those who used opioids daily, the figure rose to 75 per cent.

“It doesn’t surprise me that they want help,” Dr. Daly said. “People don’t want to die; they want to get out of the cycle of repeated overdoses.” 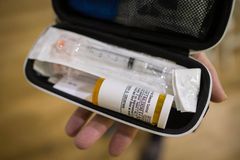 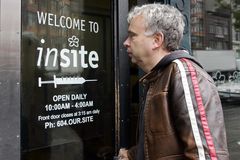 B.C. overdose deaths drop in June, more than 100 still dying each month
August 2, 2018
Follow Andrea Woo on Twitter @andreawoo
Report an error Editorial code of conduct
Due to technical reasons, we have temporarily removed commenting from our articles. We hope to have this fixed soon. Thank you for your patience. If you are looking to give feedback on our new site, please send it along to feedback@globeandmail.com. If you want to write a letter to the editor, please forward to letters@globeandmail.com.
Comments