For Chris Anderson, curator of the high-profile TED Conference, the future is an amazing thing to imagine. Some of that amazement is good, but not all of it.

Mr. Anderson wants this tension to drive TED2018, which will bring dozens of speakers to Vancouver next week for the event’s fifth year in the city.

“People are going to see stuff that they don’t know whether to be completely creeped out by it or completely enthralled,” said Mr. Anderson, adding it will feature more science and technology than in recent years.

“We’ve learned that the technologies we’ve created are really powerful, but can also have unintended consequences.”

The five-day event, which this year has the theme The Age of Amazement, will feature more than 70 speakers, including Minister of Science Kirsty Duncan; former Google vice-president Kai-Fu Lee; and Gwynne Shotwell, president of SpaceX, the space-transportation company founded by Elon Musk.

“At this conference, more than any other, there’s going to be a debate about what do we think of the future,” said Mr. Anderson. “The future is amazing, but … there’s amazing good and amazing terrifying.”

He said a lot of people think the world is currently in a very “perilous” place.

“We’re embracing those fears and the sense that the world has gone mad in a way.”

TED began in 1984 as a conference for technology, entertainment and design, but has since expanded to a wide range of topics, including innovation, philanthropy, social change and sustainability.

Each speaker has a maximum of 18 minutes to explain a big idea. The resulting TED talks − there are now more than 100,000 freely available on YouTube − have developed a loyal following, spawning books, podcasts and local spinoff events known as TEDx. Previous conferences have included big names such as former U.S. vice-president and climate activist Al Gore. Last year’s event featured a surprise video appearance by the Pope.

Audience members must apply to the conference in order to attend. Standard tickets cost US$10,000 and are now sold out.

The conference moved to Vancouver in 2014, relocating from Long Beach, Calif., for what was initially a two-year commitment. Mr. Anderson said he has no plans to move the event.

“We love Vancouver. We love the venue. We love everything about it,” he said.

The theatre in the Vancouver Convention Centre was built specifically for TED talks and is disassembled each year after the conference. Mr. Anderson said there will be more to experience outside of the theatre this year as well.

TED is a non-profit organization, described by Mr. Anderson as a media platform.

“It’s ideas shared in the context of people being given a chance to listen and reason and respond. It’s media as if the reflective reasoning side of your mind mattered,” he said. “We can learn incredible things about each other.”

Mr. Anderson said TED’s platform has grown considerably in recent years, with a 40-per-cent increase in views and listens online.

This year, he doesn’t think there’s any particular talk to watch for more than others.

“The talks that become the talk of the conference are never the ones you predict,” he said.

How to prepare and deliver a TED talk
November 4, 2013 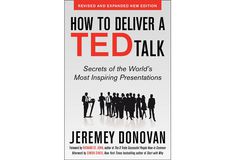