John Horgan has gained a prominent U.S. ally in his fight against the expansion of the Trans Mountain pipeline, with Washington State’s governor declaring Friday that he supports the B.C. Premier’s opposition to the project.

“We are hopeful that the Premier’s efforts to allow the voices of his citizens to be listened to will be successful because it is very much in common with our citizens,” Governor Jay Inslee said Friday at a news conference with Mr. Horgan. Both men joined officials from Oregon and California during the day for a meeting to discuss issues of mutual interest.

The governor said the $7.9-billion plan to triple the capacity of the 65-year-old pipeline between Edmonton and Burnaby is out of step with a move toward cleaner energy and protecting the environment. “We have serious questions whether it really makes sense to be making such massive investments in fossil-fuel infrastructure given the fact we know we are going to have to wean ourselves off [that] in decades to come,” Mr. Inslee said.

The former congressman, governor since 2013, denounced a federal policy supportive of Trans Mountain “that shoots Canada in the foot by going backwards in this regard. We hope that doesn’t happen.”

The Democratic governor, a pointed critic of the Trump administration who many have pegged as a possible contender for the Democratic presidential nomination in 2020, said his concern about the impacts of Trans Mountain is linked to boosted tanker traffic that might ply his state’s waters if the project proceeds.

As a result, Mr. Inslee said his state is looking at enhancing marine-safety provisions to protect the Haro Strait and the Strait of Juan de Fuca.

“There are some challenges involving the dead weight from the [Trump] government in that regard, but we’re looking at a sweep of marine-safety laws that we could introduce on the Washington side that would help reduce the risk, but we don’t want to create the risk to start with.”

Mr. Horgan’s NDP government, with support from the provincial Green Party, has been fighting the expansion of the pipeline through measures that include a court action to see if the province has the jurisdiction to limit the flow of diluted bitumen through pipelines in the province.

Alberta anger over B.C. objections to the pipeline expansion led that province’s NDP government to ban imports of B.C. wines - a measure that was eventually lifted. Alberta has also raised the possibility of curtailing petroleum shipments to B.C. for its energy needs.

Asked if Washington State would assist B.C with its energy needs if that occurred, Mr. Inslee said he hoped things did not come to that.

“We’re hopeful that cooler heads will prevail. Canada is the home of very wise and prudent decision-makers. We hope that that attitude will prevail,” he said.

He took note of a protest rally, last weekend, against the expansion that drew about 5,500 people to Burnaby, saying, “local citizens’ voices are important.”

The governor’s support for the B.C. NDP government comes in a week when Canadian cabinet ministers were in Vancouver attending the Globe Forum for sustainable businesses. They defended Ottawa’s approval of expanding Trans Mountain.

Some critics took issue with Mr. Inslee’s comments Friday, noting that Washington State has several refineries that generate tanker traffic in the state’s waters, an energy reality at odds with his opposition to Trans Mountain.

“No one has suggested today turning off all of our use of petrochemical products. No one in North America, that I know, has said we should do that tomorrow,” he said in response. “But we recognize in Washington State that our long-term future is going to have to involve cleaner energy.”

Mr. Horgan and Mr. Inslee were in agreement on another issue on Friday. The NDP Premier announced the province will contribute $300,000 toward an in-depth study with Washington State on a high-speed rail corridor enabling a one-hour trip between Vancouver and Seattle, with travel beyond to Portland and other destinations. Last week, the Washington State legislature approved US$1.2-million toward the study. 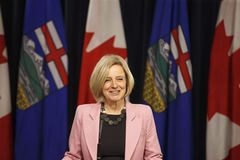 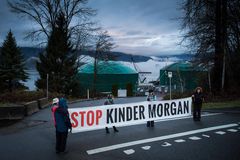