Washington State Governor Jay Inslee is siding with British Columbia in the Trans Mountain pipeline battle, calling out Prime Minister Justin Trudeau for putting billions of dollars on the table to bail out a project he describes as a “giant step backwards” in the fight against climate change.

Critics might note that that’s rich advice coming from a jurisdiction that is responsible for the majority of oil-tanker traffic in the shared waters between Washington State and British Columbia that are bound for U.S. refineries in Puget Sound.

But Mr. Inslee is the reason that there are not more tankers in the water.

Washington State already boasts one of the lowest oil-spill rates in the United States and under the Democratic Governor, regulations have been tightened around the transportation of oil, including a tax on pipelines to help pay for increased safety measures. His administration is battling the Trump administration to stop expanded offshore oil drilling.

In February, Mr. Inslee killed what would have been the United States’ largest oil-by-rail terminal by denying the project a permit. In the language used by B.C. Premier John Horgan to describe the pipeline expansion, Mr. Inslee said the environmental and public-health risks outweighed the benefits of the terminal project.

Now, the Government of Canada has committed to buy the pipeline infrastructure to ensure completion of a project that will mean Canada will replace the United States as the largest source of oil-tanker traffic in the shared waters of the Salish Sea.

Mr. Inslee has been kept in the loop about Canada’s actions by officials in Mr. Horgan’s office.

Since Mr. Horgan’s NDP government took power in B.C. last summer, the Premier and Mr. Inslee have forged a strong north-south relationship that is offering Mr. Horgan a rare ally on the pipeline battle.

United by the rallying cry of protecting the coast, the two jurisdictions have been in talks to ensure that, if Alberta follows through on the threat to cut off fuel shipments to B.C. consumers, Washington State suppliers could fill the gap. Before sending off his opinion piece on the Trudeau pipeline purchase, Mr. Inslee’s office consulted with the Premier’s office about the latest developments.

“It does not have the support of Washington State,” the Governor wrote in an opinion piece that ran in The Seattle Times in response to the Trudeau government’s announcement that it agreed to purchase the existing Trans Mountain Pipeline system for $4.5-billion and to take over the $7.4-billion Trans Mountain Expansion Project.

“This project runs counter to everything our state is doing to fight climate change, protect our endangered southern resident killer whales and protect communities from the risks associated with increased fossil-fuel transportation − by rail and by sea,” Mr. Inslee wrote.

But a spokesperson for the Canadian Association of Petroleum Producers calls the Governor’s position hypocritical. “It’s laughable. Alberta, the very place the oil sands is produced, currently has a price on carbon that’s double the proposed price on carbon in Washington State,” Chelsie Klassen said. And the Governor, she says, has had trouble securing a carbon tax − a state bill died in the legislature this spring.

Opposition from Washington State to the Kinder Morgan pipeline project is not new. In 2014, the state’s Department of Ecology made a submission to Canada’s National Energy Board hearings on the project, arguing that the project threatens Washington State’s marine waters and aquatic life.

“Canadian and provincial prevention, preparedness, and response standards are less stringent than U.S. and Washington State standards, and will not adequately protect shared waters from the risks associated with project-related tanker traffic,” the submission stated.

Matt Krogh is a U.S.-based environmental activist, heading Stand.earth’s Extreme Oil campaign. He notes Mr. Inslee is only just coming into his own as a green-minded governor. Although this is Mr. Inslee’s second term, it wasn’t until the November, 2017, election that the Democrats won full control of the state government.

“This is the first legislative session in the last five years where the Democrats have actually been able to push forward progressive polices,” Mr. Krogh said in an interview. “We have been able to play catch up, in particular, with things like the movement of fossil fuels and spills preparedness.”

He noted that there is tremendous pressure on both Washington State and British Columbia to accommodate more infrastructure for coal, gas and oil-export infrastructure. “They have painted a giant bull’s eye right here,” he said.

But when it comes to actually protecting the coast, there are gaps.

Washington State has long argued it has better marine spill-response capacity. Now, it is well ahead of B.C. in reporting spills and tracking the movement of oil. Since 2016, the state has provided quarterly reports of crude-oil shipments to emergency responders, local governments, Indigenous groups and other members of the public. Meanwhile, the B.C. Ministry of Environment can only estimate the amount of crude oil that is being shipped by rail or pipeline across the province, although it promises to release an initial report on crude-oil transport by the fall. 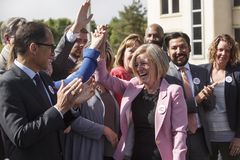 Opinion
Trudeau wanted climate change and his pipeline, too. Now, he can’t have both
May 31, 2018 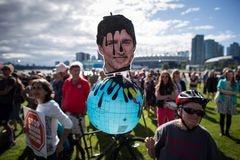 No room for compromise in Trans Mountain pipeline dispute
Subscriber content
May 31, 2018