Thousands of people have flooded into the community of Kamloops over the past three weeks to pay their respects at a memorial for the 215 children whose remains have been reported at the former Kamloops Indian Residential School.

On Wednesday, the leader of the Tk’emlúps te Secwépemc First Nation said the support has been moving but also overwhelming – and it threatens the health and safety of her people as they continue to deal with the risks of the pandemic.

“I want to express my deepest gratitude for the outpouring of support – we stand strong because of you,” Kukpi7 (Chief) Rosanne Casimir told a news conference. “I would like to make clear that as much as we appreciate how many wish to come to Tk’emlúps te Secwépemc, we also need to slow the pace.”

The Nation’s council extended its state of emergency this week, as members wait to be fully vaccinated against COVID-19.

“Please help us ensure that we do not have a tragedy upon tragedy. There have been non-stop activities since the news broke, we want to respect and to uphold the need together, and to do ceremony.”

She invited those who wish to honour the children to do so from home, or to at least consult with her Nation before travelling.

Built on the territory of the Tk’emlúps te Secwépemc First Nation in the southern B.C. Interior, the Kamloops Indian Residential School was at one point the largest of Canada’s residential schools. It operated from 1890 to 1969, mostly under a Catholic order called the Oblates of Mary Immaculate, but the federal government ran it as a day school for nine more years before it closed in 1978.

Previously, the Truth and Reconciliation Commission’s registry could confirm only 51 deaths at Kamloops from 1914 to 1963. But the Tk’emlúps community long believed that more children were buried nearby and tried for about 20 years to find them.

The Nation used ground-penetrating radar over the Victoria Day weekend to find the site. It contained the remains of 215 children, the Nation said on May 27, and remains are believed to be from previously undocumented deaths.

First Nations Health Authority Chief Medical Officer Shannon McDonald, speaking at the news conference, noted that she has not travelled to Kamloops to pay her respects in person, and encouraged others to be mindful of the health risks.

“We’ve all felt the need to respond to the hurt, to the anger, and the deep need to be with people to share our pain,” she said. “But in the context of the present pandemic … we all need to consider our space and our pace.”

Ms. Casimir noted that the Williams Lake First Nation (T’exelcemc) is preparing to investigate the former St. Joseph’s Indian Residential School, and she said the process is a difficult one. “We understand the deep wounds that these findings and investigations open up for survivors and intergenerational survivors. We stand with you as we reflect on this harsh truth that is part of our history that we need all Canadians to acknowledge and to come to terms with the repercussions of Indian residential schools.”

The federal government funded more than 130 residential schools, where an estimated 150,000 Indigenous children were taken from their families in a system designed to strip them of their language, culture and identity in efforts to assimilate them.

Ms. Casimir said her community wants a meaningful apology, but she is also working with the local Catholic bishop to seek “a more positive dialogue and some steps moving forward.” She noted that some members of her community are practising Catholics.

She added that the Nation is also working with the local RCMP detachment to try to advance the investigation. As well, a report detailing the findings of the ground-penetrating radar will not be complete until the end of June, she said. “Given the worldwide interest, we will be sharing those findings when they are available.”

B.C. communities grapple with what to do with former residential and day schools
June 14, 2021 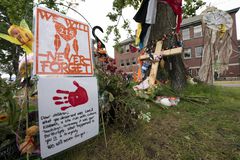 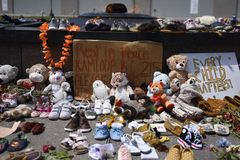 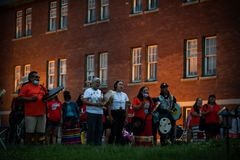