Our necks and backs are showing increased signs of chronic pain. Our teeth are cracking from stress. And our feet are developing problems – the result of too many hours unsupported by shoes and fitness videos done on floors at home.

Those are the issues that B.C. physiotherapists, massage therapists, ergonomics specialists, dentists and podiatrists say are escalating among people who have been working at home for much of the past nine months because of the pandemic.

Physiotherapists say they’ve seen a noticeable spike among existing clients who are booking visits in greater numbers to deal with a return of previously healed work-related pains or new arrivals who have been experiencing troubles for the first time.

“There’s a huge surge,” says Helen Ries, the owner of Sitka Physio & Wellness in downtown Vancouver, a company that also does ergonomics consulting.

It’s showing up as everything from stiff shoulders to carpal tunnel to achy knees.

“Easily it’s up by 25 per cent,” says Erica Mahon, a physiotherapist and managing partner of City Sports and Physiotherapy, also downtown. “People went home with just their laptops. But laptops were to give us some portability. You can’t work on a laptop all the time without repercussions.”

Both say it’s not just a question of not having the usual higher-end office equipment to work at such as desktop monitors that allow people working on screens to look ahead, instead of down; adjustable chairs with back supports; or foot rests and wrist pads.

As Ms. Ries notes, laptops set up at kitchen tables force people to lean forward and hang over their keyboards. That means the 10- to 15-pound weight at the top of the spine, otherwise known as the head, has to be held up by the neck and shoulder muscles, which then also puts pressure on the lower back.

“The weight of your head is pulling at the spine all the time,” she says.

Besides that, there’s also the stress and anxiety of the new work situation, along with the change in routines, they say.

People used to get some kind of physical activity when they went to an office to work, just getting themselves there.

Now, their biggest commute is to the fridge and bathroom in their own homes.

Mr. Perdomo, a 35-year-old software designer who normally goes to a downtown office a short distance from his West End apartment, works for a company that provided a lot of help with ergonomics for employees in the office.

But when everyone got sent home while he was away on vacation, he didn’t get to bring anything with him. And he spent the next few months working at his dining-room table and chair.

“My chair is okay for lunch and dinner, but it is not very comfortable for sitting all day,” he says.

He started getting aches in his legs, his knees and lower back.

Then, as many housebound office workers have done, he decided to try to improve his physical condition by taking up exercise. In his case, running. Then, after a few months, he ended up with even more pain, in his knees and ankles, along with shin splints.

He finally went to a physiotherapist for the first time in his life to deal with it.

“We talked about all kinds of things. My bad posture. And no breaks. I almost miss the morning commute, getting up, walking, going up and down stairs.”

Like many office workers at home, he’s also finding it harder to set boundaries around work and personal time, when work is on the table in his apartment. “You end up having strange work schedules.”

The stress of that sense of being permanently at work is something that is showing up in people’s teeth as well.

Trying to get enough exercise while working at home, with gyms closed, is causing other injuries too for the work-from-home set.

Podiatrist Amandeep Randhawa says she’s seeing more people with plantar fasciitis as they’ve taken up fitness videos at home, but without the typical support of shoes that they’d wear at a gym.

So far, employee-benefits programs and WorkSafe BC are not seeing huge spikes in their overall numbers – in part because many people have been laid off and so are not claiming anything, they say.

At Pacific Blue Cross, an employee-benefits plan that covers about 1.6 million people in B.C., claims for massage, physiotherapy and chiropractic services plummeted in the early months of the pandemic, but have been rising since early August.

“Some people don’t realize it’s a work injury at first,” she says. As well, she says, WorkSafe is often slow to accept claims for ergonomic injuries unless people can prove there was some kind of abrupt trauma.

She’s expecting even more people to start getting help from physiotherapy, ergonomics consultants and others as they become aware of the damage they’ve done.

Some companies are helping out by providing virtual consulting sessions with people like her and Ms. Ries on how to sit properly at home, even if they don’t have their usual equipment.

Companies have also started allowing employees to take equipment home, which can help.

“Everybody deserves a decent chair,” Ms. Mahon says. “How can somebody work at home all day on a kitchen chair.”

But taking equipment home has created a new wave of issues, because, until recently, that meant the equipment was at home and yet employees were starting to go back to their offices part-time.

The current lockdown has sent everyone back home again for the moment, but it will likely re-emerge as companies develop hybrid models of working. It’s something that everyone seems to want.

“Initially, when we all went home, everyone was happy about it,” Ms. Mahon says. “Now it’s morphed so that everybody wants to go back – part-time.” 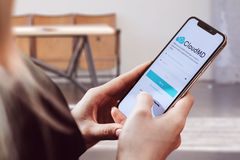