Victoria Police Const. Ian Jordan may have appeared to be unresponsive for 30 years, but his wife said his eyes would light up whenever she told him about their son.

His widow, Hilary Jordan, said unlike comatose states, Jordan seemed to experience sleep and wake cycles, yawn, sneeze and cough. He appeared to respond positively to music, often looking at the whoever was in the room when a song was playing, she said.

“He did show some signs of responsiveness. In the early days, you could feel a little pressure in his hand if you asked him to squeeze. We’re not sure if it was a reflex or not, but he would communicate through his eyes,” she said.

“His eyes would widen, often times, when I spoke about Mark, his son.”

Hilary Jordan said her husband was in a coma for the first few months of care, then reverted into a mostly unresponsive state.

She said she never got an answer about whether her husband was conscious and unable to communicate, as is the case in locked-in syndrome, or if the responses he exhibited were simply reflexes.

“That’s an age-old question I’ve been asking myself for 30 years.”

The Coma Science Group, based in Belgium, defines “coma” as a “unarousable unresponsiveness,” a category that Jordan didn’t fit into, Hilary Jordan said. Alongside that condition, the group describes varying states of consciousness, ranging from locked-in syndrome to brain death.

Locked-in syndrome describes patients who are awake and conscious but have no means of producing speech, limb or face movements. When a patient can open his eyes, but it’s only accompanied by reflexive motor activity and devoid of any voluntary interaction with the environment, he is considered to be in a vegetative state, the group said on its website.

The group is made up of dozens of doctors and scientists aiming to improve the medical care and understanding of disorders of consciousness following an acute injury.

Dr. Adrian Owen, Canada Excellence Research Chair in Cognitive Neuroscience and Imaging at The Brain and Mind Institute at Western University, said it’s rare for a patient to remain in a state of coma for longer than a few weeks before entering a vegetative state.

By studying brain imaging that uses similar technology to MRIs, his lab has identified multiple cases where someone who appears to be in a coma or vegetative state actually has some awareness.

In 2006, they showed a patient who appeared to be entirely vegetative was actually conscious. In 2010, they proved communication for the first time with a patient who had supposedly been vegetative for five years, Owen said.

“In our experience, about 20 per cent of patients who appear to be entirely unresponsive turn out to be aware,” Owen said.

At the same time, he has also reviewed cases where a family member is certain their vegetative relative is communicating and responsive, but tests prove otherwise.

“What I’ve learned is what you see is rarely what you get and we have to use these new, sophisticated technologies. In our case, it’s FMRI, or functional magnetic resonance imaging, to actually get inside this person’s head and work out really what they are experiencing,” Owen said.

Jordan’s friend, retired Sgt. Ole Jorgensen, said Jordan sometimes seemed awake during visits. His eyes were open and he would moan and groan.

Jorgensen said Jordan was not on life support and was breathing on his own.

“I can’t say whether he recognized us or not,” said Jorgensen, who sat at Jordan’s beside about once and month and filled him in on the goings-on at the police department.

“We don’t know whether he was hearing us, so, just in case (I was) keeping him up to date,” Jorgensen said.

A full police funeral for Jordan will be held in Victoria next Thursday. 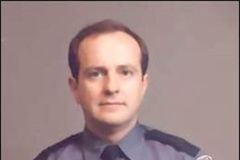