Officials in British Columbia intentionally merged two fires burning in the southern interior on Sunday, to get a better handle on the largest and highest priority wildfire in the province.

Combining the Mount Eneas fire, located between Peachland and Summerland, and the Munro Lake fire decreased the total fire perimeter and brought it down from steep and risky terrain to a more workable area, according to the B.C. Wildfire Service.

Sunday’s efforts come as the wildfire season heats up in both B.C. and Ontario. As of Sunday, there were 107 fires burning in B.C., with eight of them either highly visible or posing a potential threat to public safety, and 118 burning in Ontario, with 29 of them considered “out of control.”

Noelle Kekula, an on-site information officer with the B.C. Wildfire Service, said the decision to merge the two B.C. fires was made Sunday morning. Crews created a containment line with fire retardant, conducted test burns, then used both hand-held drip-torches and a helicopter dropping ping-pong-like balls that ignite to join the two fires.

“It makes things a lot safer for our crews,” Ms. Kekula said of the operation. “It stopped the fire from heading more west, it eliminated a bunch of fuel that was putting other things at risk and it brought the fire down from the steep ground to the flat ground.”

The lightning-caused Mount Eneas fire, which was an estimated 1,374 hectares in size before the merge, left 35 properties in the area on evacuation order and 200 more on evacuation alert on Sunday.

Gordon Fitzpatrick, whose vineyard was ordered evacuated for three days on Wednesday, watched as flames from the Mount Eneas fire jumped the highway and brushed up on his property. He turned the sprinklers on as about 30 firefighters battled the blaze.

“When the winds shifted, that’s when the inferno happened,” he said. A photo he snapped late Wednesday night shows the mountain on fire, seemingly steps from the vineyard. “It was a little close for comfort.”

While the smell of smoke lingered throughout the property on Sunday, it seemed otherwise untouched and was open for business.

On Sunday, there were eight wildfires of note in B.C.: six throughout the area overseen by the Kamloops Fire Centre area and two in the Southeast Fire Centre’s jurisdiction. Kevin Skrepnek, B.C.’s chief fire information officer, said calmer conditions in recent days have provided some reprieve, but that wildfire activity is expected to increase this week.

“Based on what we’re seeing in the weather forecast right now, it’s going to be hot and dry in the foreseeable future, with no rain in sight for many parts of the province,” he said, “so that fire danger rating has nowhere to go but up.”

Meanwhile, dozens of fires continue to burn in Northern Ontario, with some temporarily closing a section of the Trans-Canada Highway and forcing evacuations of more than 50 homes. As of Saturday night, 64 fires were burning in the region.

The largest wildfire in Ontario, called Parry Sound 33, grew by 10 times over the weekend as lightning repeatedly struck the hot, dry area near Sudbury. The fire now totals 48 square kilometres.

Mandatory evacuation orders have been issued for residents in the region of Key Harbour and the municipality of Killarney whose houses are accessible only by boat. Killarney Deputy Mayor Nancy Wirtz declared a state of emergency due to the fire Saturday.

"We've had a lot of smoke," said Renee Germain who lives in Warren, Ont., between Sudbury and North Bay. She's offering her property, which is not under evacuation order, as a refuge for those with horses and livestock who have had to abandon their farms.

Firefighters from across Canada, the United States and Mexico have come to help battle the flames on the ground. They are being assisted by multiple water bombers and helicopters dousing the flames from the air, but Parry Sound 33, among others, remains out of control.

Wildfires expected to intensify this week in both B.C. and Ontario
July 22, 2018 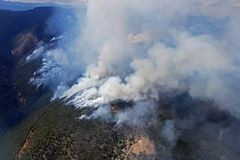 Lightning-caused wildfires prompt evacuations in northeastern Ontario
July 21, 2018
Follow Andrea Woo and Jack Hauen on Twitter @andreawoo @jackhauen
Report an error Editorial code of conduct
Due to technical reasons, we have temporarily removed commenting from our articles. We hope to have this fixed soon. Thank you for your patience. If you are looking to give feedback on our new site, please send it along to feedback@globeandmail.com. If you want to write a letter to the editor, please forward to letters@globeandmail.com.
Comments