It was over the lunch hour, just three weeks into the new school year in September, 2018, when the principal at a Toronto elementary school was alerted to a disturbance on the playground.

A nine-year-old boy, known to have mental-health issues and a history of violent outbursts, had been in a fight with an older student, and was still angry.

The principal approached the child, who started yelling profanities, spitting and throwing objects that he found on the playground.

Within moments, a video captured by a teacher shows the principal behind the student, pushing him to the ground and appearing to stomp on the boy’s arm. In a trial at Old City Hall this week, court heard that the boy was left with a bruise that looked like a shoe-print, although the principal denied hurting the child and said he did not stomp but was instead trying to free his leg from the boy’s grasp.

Now, in a rare intersection of school discipline and legal justice, an Ontario judge will decide if the principal’s actions were justifiable. Did Sean Hume act reasonably in his attempts to calm the child and protect other students on the playground at Chester Elementary School or, in a fit of rage after the boy spat in his face, did he assault the child?

Mr. Hume has pleaded not guilty to assault.

The case comes as educators and parents face growing concerns over how schools across the country are accommodating students with complex needs and disruptive behaviours. Families say their children have been excluded from school for days on end, restrained or put in isolation rooms. Meanwhile, teachers and other school staff report an uptick in violent student behaviours that have led to them experiencing serious injuries, including concussions.

The court heard testimony over four days this week that the child, now 10 and attending a different school, was diagnosed with anxiety and is prone to outbursts in school and at home, where he screamed, swore, threw objects, punched and kicked. The child was open about his mental-health illness, and described to the court that he lashed out when provoked.

However, there were also questions raised in court about whether the school was doing enough, despite the parents’ urging, to prevent the outbursts, and if a student safety plan – a crisis-response document – was created when the child’s behaviour worsened.

The child’s mom told the court that she left a meeting with Mr. Hume in late August, 2018, feeling “dismissed.” The parents had brought in a letter from a psychiatrist, and requested that their child have a psychoeducational assessment and an Individual Education Plan, created for children who need additional supports.

They did not receive assurances from Mr. Hume that either would be provided, she told the court.

But Mr. Hume testified that the complainant, whose identity is protected by a publication ban, was not academically behind. He said that he did not decline the parents’ request, and tried to be open about the process, assuring them that their child was in a “safe and caring place.” He said a safety plan was drafted the previous school year for the boy, and there were supports in place for the child if he started showing signs of acting out.

The court watched three separate short cellphone videos of the September, 2018, altercation recorded by Kathryn Weinman, a teacher at the school, from her second-floor office.

In the first clip, the child is throwing objects from the playground at Mr. Hume. Then, in the second clip, the child spits in Mr. Hume’s face. Within a few seconds, Mr. Hume goes behind the child, appears to grab him and push him the ground. Mr. Hume then appears to stomp on the boy’s arm, and tries to extract his leg from the boy’s grip. In the third clip, the child’s dad, who was called by the office, the court heard, comes into the scene and walks him away.

Ms. Weinman testified that she was scared by the encounter, which is why she started filming. “It looked like a fight. I wasn’t sure what was going on,” she told the court. She said that the child was “clearly out of control,” but it also seemed like Mr. Hume was “almost egging him on.”

“It was a very hard thing to watch,” she told the court, later adding: “It’s hard to watch a kid being pushed, thrown on the ground and stomped on, a kid that I know has a hard time.”

Mr. Hume, however, told the court that the boy was in crisis and he spoke to him calmly and tried to invite him to the school office.

Mr. Hume was spat on, his shirt was torn and while he tried to dodge what the boy was throwing at him, he used his cellphone to call the school office and asked them to contact the child’s parents and, if not, the police, the court heard.

“I was trying to keep his attention on me,” Mr. Hume told the court. Staff, he said, moved the other children to a different part of the schoolyard, and eventually inside the building.

“I had huge concerns for the safety of students on the yard.“

Outside the courtroom, Mr. Hume’s lawyer, Michael Caroline, described the case as “complex.”

“The issue of protection extends beyond the student and to the student body at large,” he said.

The trial will continue in February.

Opinion
How can we prepare for school violence if the attacker is a student?
February 24, 2016 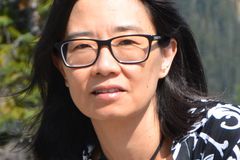