When Toronto unveiled its Vision Zero plan – an attempt to eliminate traffic deaths and serious injuries – staff were careful to low-ball expectations. The numbers since the 2016 announcement suggest they were right to do so, as they show no sustained improvement in safety for those on foot. The past year has illustrated the point: 41 pedestrians died in Toronto – nearly 10 per cent more than the city’s average over the previous five years.

Fixing a road system built over generations takes time, and some ideas for improvement are complicated. Banning right turns on red lights, or giving police a device known as a textalyzer that can determine whether a driver is texting, for example, would require the approval of higher levels of government. Shifting attitudes so that safe roads are a higher priority than reduced congestion would also take time. But pedestrian advocates, lawyers and victims’ families have pointed over the past three years to a slew of cheap and simple fixes.

These 10 ideas can be done quickly, experts say, and need only political will at city hall.

Toronto generally doesn’t release the names of victims of traffic collisions. Police say there is no investigative reason to do so. But identifying these people – with their families’ consent – would challenge the idea that anonymous deaths are the cost of urban mobility. “If we see fatalities as statistics, which is the result of not releasing the names, it’s easier to maintain that stance,” said Michael Black, who is on the steering committee of the advocacy group Walk Toronto. “If you release the names, I think people will be more apt to say: Should part of walking be running the risk of being killed?”

Get rid of children-at-play signs

Drive through many residential neighbourhoods and you’ll see lawn signs warning motorists to be careful. Some politicians love them: With each sign, they hand out a bit of visual proof that something is being done. Unfortunately, it may do more harm than good. U.S. research shows such signs do not reduce the speed of traffic or make drivers more observant. Meanwhile, parents and children might have a false sense of security. Safety experts say drivers in cities should always assume children may be present.

Only steps from the council chamber where the city leaders debate road safety is a dangerous throwback to an earlier engineering approach. The extra right-turn lane curving from Bay Street to Queen Street allows drivers to take the corner at greater speed and forces pedestrians to cross more lanes. Some such lanes are being removed elsewhere in the city, which requires lengthy reconstruction. However, the sort of security measures used to prevent vehicle attacks at public events can be employed in the meantime. Simply block the lane.

A few years ago, Montreal’s fleet of municipal trucks was fitted with sideguards that prevent cyclists and pedestrians from being sucked under the wheels. Toronto could do the same, and require city contractors and suppliers to install the guards as well. Patrick Brown, a personal-injury lawyer with McLeish Orlando who represents traffic victims, thinks the city could go even further by requiring additional safety training for staff and those working on behalf of the city who drive a truck in the core.

Countdown clocks at intersection crosswalks were intended to prevent slow walkers from being surprised by a light change at mid-crossing. But a study found a 26-per-cent increase in motor-vehicle collisions at intersections with the clocks, which allow drivers to see from a distance when the light will change. Some speed up, while others slow down, creating potentially dangerous conflicts. Also, the rule that pedestrians should not start to cross once the count starts gives those on foot much less crossing time than drivers, even where they are the majority.

People who want measures to slow traffic on their streets – speed bumps, for instance – face daunting requirements. The city sends ballots to residents of the block to vote on it. A majority of those people must return the ballots, and 60 per cent have to be in favour. There are also rules about the number of pedestrians who use a crossing before a traffic signal is warranted, for example. Council can override the advice of staff, but pressure to do so often comes only after a death. “I use the term blood sacrifice,” Walk Toronto’s Mr. Black said. “In order to get road improvements in Toronto, often that’s what it takes.”

Toronto Police Chief Mark Saunders recently acknowledged that disbanding the force’s dedicated traffic unit in 2012 helped lead to lawless roads. The number of tickets plunged, and, in 2018, police laid the lowest number of criminal charges related to driving on record. The number of collisions jumped. In November, Chief Saunders got approval to increase traffic enforcement, but the small unit will face motorists who have learned they could drive with impunity. “Obviously, the more enforcement, the more people are going to get caught, the more they think they’re going to get caught and they change their behaviour,” said Mr. Brown, who adds that traffic cameras would help.

On residential streets where parking alternates sides, the safest time to walk is the morning of changeover day. Those few hours when vehicles are scattered on both sides narrow the roadway, encouraging drivers to slow down. Since speed bumps can be so hard to get, a similar effect can be achieved by pinching the road with both-side parking, a planter or another obstacle. Or narrow the mouth of the street, compelling drivers to take the turn more slowly and preventing them speeding into the neighbourhood.

Traffic signals are often co-ordinated to produce a continuous wave of green lights for drivers. On some roads, Toronto posts the speed that will achieve this. But nowhere are the green lights timed for pedestrians, not even on streets where those on foot are the majority. Mr. Black of Walk Toronto says the approach could help on Bay Street during rush hour. “Stoplights are almost at every street [and] you’ve got huge swells of pedestrians moving along,” he said. The city says timing for pedestrians is too hard, because people walk at different speeds. But some assumptions can be made. The city already has a default walking speed it uses to program countdown timers.

The British city of Bath has a small monument to the “lives lost and broken on our roads.” While temporary memorials spring up in Toronto, there is no formal place of remembrance to indicate how seriously the city views the issue. However, says Jess Spieker of the advocacy group Friends and Families for Safe Streets, to be meaningful, a monument would have to reflect a true change in attitude. “You would think at first glance that if they were to put up such a monument, it would mean that they acknowledged the severity of the public-health crisis that road violence has been allowed to become,” she said. “And you would expect their actions to match such a declaration.” 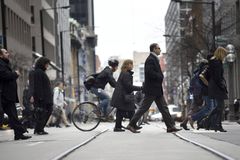 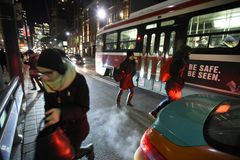 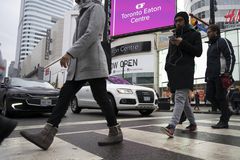