Since 2014, Jay Soule has used his surroundings as a canvas for his art and activism. While his work can sometimes be found in studios and galleries, it can also be seen on a billboard in the downtown core, or painted onto walls, or even on pieces of money.

Mr. Soule is from the Chippewas of the Thames First Nation near London, Ont. When he isn’t producing street art, he owns and operates Armoured Soul Tattoos and Piercing at Queen and Tecumseth in Toronto. He’s been working as a tattoo artist for 13 years, but began a new style of painting five years ago, during a break that coincided with the start of the Idle No More movement.

He credits the movement with informing his style of art and advocacy and explains that the movement spurred him to actively contribute to Indigenous activism. “I decided I would use art as a means of communicating the struggles Indigenous people face in Canada,” he said. During this time, he began working under the pseudonym Chippewar to reflect his Chippewa identity and the role of the warrior.

“Street art in general is a really good means of meeting the demographic or people that you want to speak to,” Mr. Soule said. “My work’s hard to get into a gallery, so taking it to the street is a way for my audience, my demographic, to be able to check out my work.”

Mr. Soule asserts that there is a fine line between street art and vandalism. He only does murals in areas where they’re permitted. “My work is about sharing art, sharing conversation, and sharing space,” he said. “The Indigenous way has always been to share space respectfully.”

The Globe and Mail sat down with Mr. Soule to talk about some of his pieces.

Mr. Soule’s first “bulletin board” piece went up in late 2014, appearing in a “dodgy plaza” right at Queen and Gladstone, in Toronto’s downtown west-end. He printed a sheet of white paper, overlaid with black and red text that read: “Did you know in Canada there are 1181 missing and murdered Indigenous women and girls[?]” It was punctuated with the hashtags “#INQUIRYNOW” and “#MMIW.” He devised the message after prime minister Stephen Harper said that a national inquiry into the issue of missing and murdered indigenous women and girls “isn’t really high on our radar.”

Mr. Soule designed the PSA-style piece to highlight the severity of the issue. He glued the sheet to a wood panel, which he screwed onto a community bulletin board. (He used different screw heads to install it, making removal more challenging.) The aesthetic for the piece is purposefully simple. “When it comes to things being proper on paper, it’s always white background, black text,” Mr. Soule notes. “I felt like for that particular one, it would look a little official.”

Though the area is a hotspot for graffiti, Mr. Soule notes that no one tagged over his piece. Instead, he often found notes of support on it such as a taped note that read, “I care. PS. If you care, do the same: call your federal candidate.”

The bulletin board remained in the plaza for a year.

Mr. Soule spent Canada Day 2016 painting this mural on the brick wall behind his tattoo shop’s building. In this piece, he used Indigenous imagery to reimagine both the Canadian flag and the anthem to highlight the argument that Indigenous histories and identities have historically been erased in mainstream Canadian culture.

“The four colours are the medicine wheel. It’s kind of the most recognizable symbol associated with Indigenous people,” Mr. Soule said.

The bottom of the mural read simply, “Honour our treaties.”

“Indigenous people live in poverty and have all these terrible social issues because of the poverty,” explained Mr. Soule, adding that, meanwhile, “Canada is rich and abundant in resources that they extract, yet Indigenous people don’t see the return from it as we should. That’s part of honouring the treaties.”

The mural stood untouched for seven months, at which time Mr. Soule and a friend painted a new mural overtop of it.

Not So Funny Money

In the summer of 2017, Mr. Soule started printing small white stickers in the shape of speech bubbles, with quotes in black text, to be slapped on corresponding Canadian bills. The campaign, which aims to change the faces on our bills by highlighting anti-Indigenous quotes from individuals such as Sir John A. MacDonald and Wilfrid Laurier, was prompted by an everyday exchange of cash in 2016 at his tattoo shop that stopped Mr. Soule in his tracks.

Mr. Soule started brainstorming ways to leave a mark on the banknotes. A first attempt at a stamp proved ineffective on Canada’s plastic bills, as the ink would rub off. Instead, he printed the vinyl stickers and distributed them to people to apply to the bills.

An added benefit to sticker campaigns is that they’re mobile. Now, Mr. Soule’s art and message can be physically spread across the country.

’Money received by First Nations are NOT tax dollars’

If you’ve been at the corner of Richmond and Spadina this spring, you might have noticed Mr. Soule’s latest work.

“Right there, that’s a thoroughfare right to the [Gardiner Expressway] highway, so it’s a highly visible area,” he said, explaining why he chose the intersection.

Mr. Soule started designing the message after hearing a particularly racist caller on a radio show, who implied that tax dollars were used to pay for Indigenous communities, and payments to those communities should be cut off.

“The government using the word ‘funding’ when they talk about Indigenous money leads people to believe that,” he said. “It’s the opposite way around: Canada’s wealth is built on the backs of Indigenous people, and we’re not getting our fair share.”

The piece aims to addresses the subtle role of language plays in racism. Mr. Soule argues that dubbing payments made to Indigenous communities “funding” suggests they aren’t earned.

Mr. Soule paid for the billboard, which remained up until the end of April, out of his own pocket. He has replaced it with a new billboard addressing treaty agreements, but he hopes the message will continue to be shared.

“It’s reached a lot of people, but the real test is going to be moving forward,” he said. “We know language is very, very powerful, so let’s change the language. Let’s change the words that they’re using in a way that doesn’t make us look like we’re a burden to Canada.”

Project to display work from female Indigenous artists on billboards across Canada
May 14, 2018 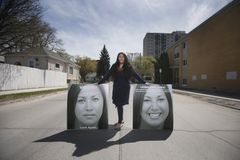 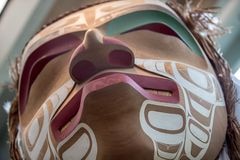 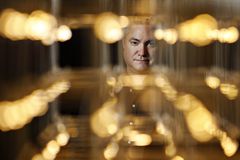