For years, municipalities have been trying to find the most effective method of recycling.

According to a York University study, bag-based recycling is the most effective system to manage contamination rates and the least expensive to implement.

Municipal recycling systems are typically box or cart-based, although more and more municipalities, such as Halifax, have begun to shift to bag-based programs, which use recycling bags as their primary means of collection.

Part of this stems from the need to reduce contamination after China, the world’s biggest consumer of recycled materials, introduced strict recycling regulations earlier this year. China will no longer accept contaminated materials − for example, an unwashed plastic container with food residue or a newspaper splashed with coffee − that exceed more than 0.5 per cent of the total recyclables.

For context, the rate of contaminated recyclables in the City of Toronto, like many large cities, hovers at around 25 per cent of all recycled materials.

The York study found that contamination rates are approximately 8 per cent lower in bag, or a combination of bag and box-based, systems − compared to cart or box-based systems.

“Bags significantly reduce contamination in the recycling stream. … There are very few opportunities for illegal dumping,” said Calvin Lakhan, the lead researcher on the study. Illegal dumping happens when someone throws garbage, or something else that doesn’t belong, in with their recycling.

Mr. Lakhan also said the use of bags can allow for unlimited capacity for recycling, so that a family won’t run out of space like they might with other types of systems. And, he said, it’s much cheaper to implement.

The study was sponsored by Clorox Company, a manufacturer of a wide array of consumer products, but left researchers with “complete discretion and latitude” as to how it was conducted.

In Ontario, “the conversation around recycling has historically revolved around carts and boxes,” said Mr. Lakhan, as opposed to considering bags as a viable option. It is important that this changes, he said, especially in light of the new regulations in China.

Mr. Lakhan said that because bag-based systems are more likely to reduce contamination, the “revenue received from that material goes up.”

However, bag-based recycling programs come with their own set of challenges for municipalities.

Quinte Waste Solutions, which provides recycling to nine Ontario municipalities, including Belleville, Quinte West and Tyendinaga Township, says on its website that “boxes are better than bags.”

Rachel Revoy, a communications co-ordinator with Quinte Waste Solutions, said this applies to the company’s specific recycling program, rather than to all recycling programs. “We have someone whose job it is to rip open every single bag. We don’t have the machinery of a big knife to cut open all the bags and to send it down the conveyor belt.”

She added that “because people are using boxes, they’re a little bit more conscious of what is going into those blue boxes and the driver at the curb can see what’s going in there and monitor it.”

Machines called bag breakers are needed to prevent the thin plastic of recycling bags from “gunking up the system,” Mr. Lakhan said . Bag breakers require a one-time fee but will save municipalities money in the long run, he said.

In British Columbia, the use of bag breakers has not been successful. Recycle BC, which manages more than 98 per cent of recycling in the province, uses a bag and box-based system − but it is different from what the York study suggests.

Instead of utilizing one-use plastic bags, the multistream recycling system in B.C. uses a reusable plastic bag to recycle paper and cardboard products.

Allen Langdon, the managing director of Recycle BC, says that the regions that still use one-use blue recycling bags will phase them out by July 1, 2020. He said that blue bags are not recyclable and typically require a worker to manually open them, which can make for dangerous work.

Mr. Langdon said Recycle BC hasn’t found a bag breaker that has worked successfully in its processing facilities. “There just didn’t seem to be a way to efficiently use a bag breaker to break [blue bags.] And that’s why most everyone in B.C. right now is manually breaking them.” 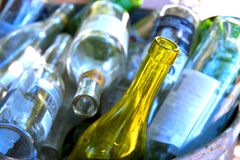 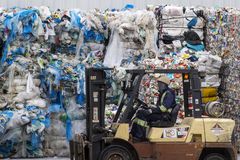