Stephen Galyen has not missed a day of work since Thursday, when a powerful tornado in Barrie, Ont., hurled his construction trailer more than 30 metres before he and two coworkers had a chance to escape it.

The 35-year-old site supervisor at a local construction company now has several dislocated fingers, a broken nose and cuts all over his body. Yet, nearly a week later, he still cannot believe his luck.

“Anybody that’s come by and seen photos cannot believe anybody survived,” he said.

Thursday’s tornado damaged more than 150 homes, flipped cars and scattered insulation and siding across a neighbourhood in the city in Southern Ontario. Environment Canada said winds reached 210 kilometres an hour. The “incredible” silver lining to the disaster, Barrie Mayor Jeff Lehman said the day after the tornado, was that nobody lost their lives. For three men working construction that afternoon, it was a close call.

It was calm and sunny on Thursday when Mr. Galyen returned from Home Depot and walked into his company’s construction trailer. In it, he shared a few words with his coworkers, Eddie Amelard, 22, and Chris Russo, 51, before Mr. Russo interrupted their conversation to point at a tornado raging toward the back window. Before the trio could react, the twister blew the doors off the trailer and sent it flipping. Mr. Galyen clung onto a desk as he and his colleagues were hurled from wall to wall.

“We were hitting the ceiling, the wall, the floor. It was just tumbling over and over,” he said.

Mr. Galyen blacked out for what he said felt like 30 seconds. When he regained consciousness, he found himself in water and dirt, the trailer reduced to bits around him. Still confused, his first instinct was to take cover from the debris being tossed around him: fridges, filing cabinets, even cars. His second instinct was to check on Mr. Russo and Mr. Amelard, both lying semi-conscious about 10 metres away from him.

“We probably had 100 cuts on each of us, blood everywhere,” he said.

Mr. Amelard was losing blood from his arm and head, so Mr. Galyen and Mr. Russo carried him to their company’s nearby sales office. Mr. Galyen wrapped his shirt and belt around Mr. Amelard’s wounds and then ran to flag down “cop cars, ambulances, anything we saw coming.” Paramedics soon rushed onto the scene and transported the three men to Royal Victoria Regional Health Centre. It’s only during his ride in the ambulance that Mr. Galyen really noticed his own injuries.

“You’re so jacked up on adrenalin at the moment you feel like you’re okay; you try to help everybody, you’re running around,” he said. “Then the reality sets in; you’re in pretty rough shape.”

Mr. Galyen said he and his colleagues have been texting regularly since Friday, all grateful for their fate.

“You see your friends, they’re bleeding everywhere. … You’re just hoping everybody is going to be okay,” he said. “You think about your kids and your family. You just want to live.”

Pamela Ventresca, the owner of PACE Developments, said she cannot believe her three employees are alive. While many residents were able to take cover in their basements when the tornado devastated the neighbourhood, Mr. Galyen, Mr. Russo and Mr. Amelard had nowhere to hide.

“These gentlemen probably got the worst of it out of everyone,” she said. “But everything missed them, it’s like they were in a bubble.”

Ms. Ventresca said the crew is lucky that the winds did not make the trailer’s propane and diesel tanks explode. She also said the tornado’s timing was fortunate; PACE’s security footage shows that the trailer started rolling at around 2:22 p.m., just eight minutes before a group of 10 to 15 workers usually go in there for a coffee break. That day, most workers were safe, working away from the trailer at the company’s main construction site nearby, which was largely untouched by the storm. 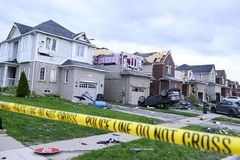 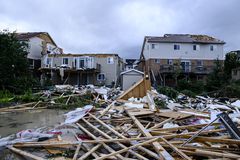 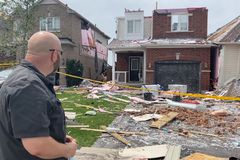