Jane Jacobs’s 1961 book The Death and Life of Great American Cities landed like a hand grenade in the smug little world of urban planning. With fierce argument and a straightforward style, it took apart the reigning orthodoxies that had led authorities to rip down vibrant old neighbourhoods and erect sterile precincts of apartment towers. Every young architect and planner since has been exposed to its lessons about building cities on a human scale.

And yet, in practice, Ms. Jacobs’s ideas have been ignored in much of the world. Many of China’s modern cities are vast agglomerations of expressways and towers. Beijing long ago demolished most of its historic hutongs, intimate neighbourhoods lined by courtyard housing. A couple of years ago it opened its seventh ring road, another superhighway encircling the capital. North American cities kept sprawling for decades after Ms. Jacobs’s book came out, giving us the soulless, car-dependent hinterlands of Houston, Phoenix and Toronto.

The shock of the global pandemic offers cities a rare chance to recapture the spirit of Ms. Jacobs. Many are making use of the pause in the usual urban bustle to try to smash the tyranny of the automobile. Instead of planning yet more urban expressways, they are putting in bicycle lanes, opening patios and giving pedestrians more space to ramble. One of the leaders of this encouraging movement is Paris.

Under Mayor Anne Hidalgo, who took office in 2014, the French capital has already banned cars from highways along the Seine, opened scores of new bike lanes and planted thousands of trees to “green” the city. In her successful campaign for re-election in March, Ms. Hidalgo went a step further. She promised to create a ville du quart d’heure, a 15-minute city. The aim is to give residents everything they need within a convenient distance, from doctors’ offices and grocery stores to parks and sports centres. Freed from the burden of commuting, often by car, they would live healthier, less stressed lives.

Ms. Hidalgo borrowed the concept from Carlos Moreno, a professor at the Sorbonne. He, in turn, was inspired by Ms. Jacobs. He wants each part of the city to supply six needs: working, living, caring, supplying, learning and enjoying. Constant commuting, he says, robs city dwellers of time and peace of mind. “That is why we have to have this revolution, to have a city with lots of centres where people can find what they need,” he says, according to Britain’s The Guardian.

That means throwing a Jacobs-style grenade at established zoning rules. Designed to protect residents from polluting urban industries, those rules sectioned off cities into discrete zones: one for working, one for living, another for recreation and another for shopping. That helped give rise to giant shopping centres, business parks and housing estates. The 15-minute city would mix them up again, making for a much livelier and diverse urban landscape.

Naturally, not everyone loves this utopian vision. The car lobby has never forgiven Ms. Hidalgo for getting rid of the roadways by the Seine. The yellow-jacket protests that swept France were in part a backlash over environmental measures that make driving more irritating and expensive. The same anger over the “war on the car” helped bring Rob Ford to the mayor’s office in Toronto in 2010. The 15-minute city will be a harder sell in Atlanta or Calgary than in Paris, with its busy, vital, densely populated centre.

But the notion is catching on all the same. Plan Melbourne, a blueprint for the growth of the Australian city, embraces the idea of the 20-minute neighbourhood. Portland, Ore., has a climate action plan that aims to have nine out of 10 residents living in neighbourhoods where they can walk or bike to most non-work destinations. In Barcelona’s “superblocks,” the streets are blocked off to most traffic, giving them over to walking, biking and play areas. 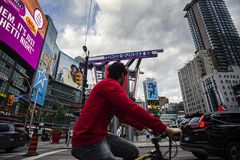 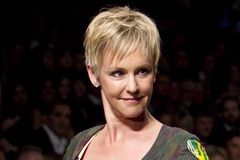 Opinion
Can you please direct me to the nearest toilet? Canadians face public washroom shortage
July 4, 2020 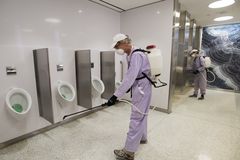