The Chelsea Hotel in downtown Toronto is as wide as a river and seems high as a mountain – its concrete slab fills 26 floors and a whole block. It’s hard to imagine what could bring down a building this big.

The answer: demolition contractors. In about two years, the 1,400-room hotel will come down, replaced by developer Great Eagle with three towers totalling 1.7 million square feet. Once complete, the Chelsea will be the among the tallest buildings ever demolished in Canada. Half of the hotel is only 30 years old.

Should this be happening? Given the global climate crisis, is it right to junk a building only to replace it with huge new towers of carbon-intensive concrete? There’s a growing movement to view existing buildings as resources of “embodied energy” that need to be preserved.

It’s a powerful argument – and if we took it seriously, it would turn the logic of urban planning in North America upside down. Rather than demolish big buildings for bigger ones, we would be forced to look elsewhere in our cities to put growth.

Buildings are major contributors to climate change. Globally, the construction sector generates 30 per cent of greenhouse gas emissions. And concrete is a major culprit: The cement industry alone generates somewhere between 4 per cent and 8 per cent of all emissions. Reaching the goals of the Paris Agreement, limiting global warming to 1.5 degrees, means reaching zero emissions globally by 2050. This requires radical change to every aspect of our economy and culture.

For buildings, the crucial statistic is carbon emissions through the whole life of a structure. What energy does it require to build, operate and demolish? This sort of “whole life-cycle analytics” is an emerging industry standard, says Jeff Ranson, the Greater Toronto Area director for the Canada Green Building Council.

“Preserving the existing building is really about avoiding the emissions of the new building, particularly if it is concrete and steel,” Mr. Ranson explains. “There’s a tradeoff between those and the energy-performance savings you might get from the new building.”

That’s because new buildings typically are more energy-efficient than their predecessors. And urban density has other beneficial effects. Peter Clewes of architectsAlliance, who is leading the design of the Great Eagle project, points out that the massive development would more than double the floor space on the site, providing homes and workplaces for thousands of people who are likely to walk and take transit rather than drive. “What’s the impact over the next hundred years of that added density?" he asks. "And of people being able to walk to work, and live more sustainably than they would somewhere else?”

But this is a false choice – between a stagnant city and supertall towers – that has been created by policy. Toronto’s Official Plan, like most land-use planning in North American cities, focuses large-scale new development in a few places and forbids it elsewhere.

The result: tightly concentrated development, such as the Chelsea project, “which is an outlet valve for a failure to deliver density more broadly,” says Mr. Ranson. “Growth is being pushed into a few places, which creates an artificial scarcity of development land.” This land is more expensive, as developers compete for it, “and that means they’re pitching for supertall buildings.” It becomes profitable to tear down the 800,000-square-foot Chelsea. This is the economic logic that can move mountains.

This is bad news for the climate. Supertall buildings in Canada are almost all concrete; they come with deep foundations and large parking garages, also made of the same material. They require years of work with heavy equipment to construct.

And, of course, they mean demolishing existing buildings. Sometimes large ones. To see this taken to an extreme, we can look at the other place in North America where it’s economical to tear down towers: New York. There, preservationists and sustainability advocates are complaining about the demolition of 270 Park Avenue, a 1961 office building by the modernists Skidmore Owings & Merrill that was designed principally by the pioneering female architect Natalie de Blois.

City officials didn’t see it as worthy of landmark protection, and they’re allowing JPMorganChase to tear down the 55-storey building – even though it was renovated less than a decade ago. This is a result of a 2017 zoning change for the area around Grand Central Station, designed to attract the shiny, bulky towers that corporate tenants now prefer.

That policy aim is defensible: More jobs, near transit, in a growing city. Where should new buildings go, if only certain types of sites are available for development? Heritage concerns and planning regulations make this a very difficult problem in midtown Manhattan.

In Toronto, it’s much easier. The city, even the central area, is made up largely of houses. Planning protects those neighbourhoods – though they are changing, with renovation and monster home construction – even while it allows supertalls elsewhere.

From a climate perspective, this is backward. Near Yonge and Eglinton, one of Toronto’s designated “growth centres,” an office building at 150 Eglinton Avenue East is slated to be demolished and replaced by a tower.

Designed by the important architect Peter Dickinson in 1959, it’s a 10-storey concrete building wrapped in limestone and glass: a store of embodied energy, in reasonable condition. Yet it’s being torn down, for a tower that will replace the existing office space and add condo apartments. Meanwhile, nearby, block after block of houses – small buildings made of wood – remain protected by planning and politics.

A city planned around reducing embodied energy would not make that choice. It would replace all of those houses with low apartment buildings made of wood. A recent paper from the Council for Tall Buildings and Urban Habitat finds that four-storey courtyard buildings – low, but dense – score best on energy use and carbon emissions. You could fill much of Toronto with those.

But this “means imagining a radically different kind of city,” says Kelly Doran of MASS Design Group, an award-winning Canadian architect and a leader of the climate initiative Canadian Architects Declare. “For our profession, there are not a lot of options to achieve lower emissions. And getting there” – to the Paris Agreement goals – “means blowing up the entire system of how we plan our cities.”

The result in a few decades could be a low-slung, low-carbon city. From the heights of the last supertall tower, the views will be fantastic.

Editor’s note: An earlier version of this story incorrectly identified the Chelsea Hotel as the Delta Chelsea. 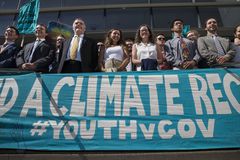 Greta Thunberg joins climate march in Switzerland, tells world leaders they ‘have not seen anything yet’
Subscriber content
January 17, 2020 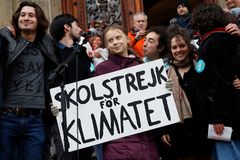 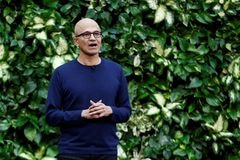