Toronto’s move to restrict how people use the city’s parks and a broader clampdown on public space are leading to confusion and concern.

Mayor John Tory signed a new bylaw this week that requires people who don’t live together to stay at least two metres apart while in parks and public squares. The bylaw carries a set fine of $1,000, Mr. Tory said on Friday, which is among the stiffest in the country.

“We are not saying to people, don’t go to the park,” Mr. Tory said on Thursday when he unveiled the bylaw. “We’re just asking people to engage in common-sense behaviour and to take account of the fact that they need to separate themselves from other people that they don’t live with.”

The city had already shut down playgrounds and other public amenities. The bylaw allows people to use the green space in parks as long as they have no more than “incidental” close contact.

“The policing of our movement like that … just really unsettles me,” said Cara Chellew, an organizer with the Toronto Public Space Committee, a group of advocates. “It’s something that I understand rationally. But you know, it’s a visceral sense of something is not right here, that this is not how we should be governing ourselves.”

Sabina Ali said many in her Thorncliffe Park neighbourhood are leery about allowing children out, worried they might run afoul of escalating and expensive rules they don’t fully understand.

“I think with the recent bylaw, that people are more scared now,” said Ms. Ali, the executive director of the Thorncliffe Park Women’s Committee, a grassroots organization helping newcomers.

The bylaw follows days of public-health statements that sought to balance the message that it’s best to stay at home as much as possible with the advice that outdoor activity is healthy as long as you keep your distance.

However, the city has closed parking spaces associated with many of the public green spaces, making them harder to reach for people not within walking distance.

“We need public space right now. We’re seeing that it’s really essential, and not everyone is fortunate enough to live across from a big park,” Ms. Chellew said.

The city has also resisted calls to close lanes of some roads, which advocates say would give pedestrians squeezed onto narrow sidewalks more room to spread out.

Several cities, in Canada and abroad, have opened up streets or are looking at doing so. And different jurisdictions are taking a broad range of approaches to enforcing reduced public contact.

In Vancouver, officers can warn people who are not maintaining the two-metre distance health officials recommend, but they cannot fine them. Calgary also doesn’t have legally enforced physical distance rules, nor does Winnipeg.

Nova Scotia has authorized police provincewide to fine people who don’t live together $1,000 if they do not keep their distance in public places. The city of Brampton, to the northwest of Toronto, this week imposed $500 fines for people of different households not keeping two metres apart in public. Both jurisdictions include sidewalks in their enforcement.

Ontario could see up to 15,000 deaths from COVID-19, health officials warn

Although Toronto’s two-metre bylaw doesn’t include sidewalks, pedestrian advocate Michael Black is not convinced all police officers will know that. More broadly, he’s concerned about measures he sees as chipping away at what he described as the “basic freedom” of moving around on foot.

And he wonders at the way some of the city restrictions are being applied. He points as an example to Tommy Thompson Park, an urban bird sanctuary. The visitor centre is closed, but the wide road leading to the lighthouse at the end of the peninsula offers lots of space for people to spread out.

“You go there, and what do you see? A big sign … which says closed due to COVID-19,” said Mr. Black, with Walk Toronto. “It is possible to slip around the gate, but the gate itself is locked and has this sign. So a lot of people who are law-abiding will assume that they shouldn’t sneak in." 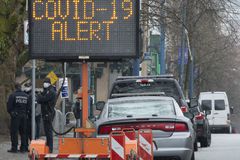 How people are beating the social isolation blues on social media
3:39
April 3, 2020 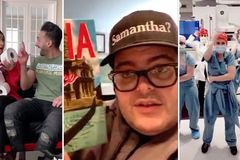