For candidates in the Toronto civic election scheduled for Oct. 22, uncertainty over the city’s ward boundaries is creating chaos – and a learning opportunity.

“It’s extremely chaotic for everybody,” long-time councillor John Filion said in an interview, “but political life is often chaotic. Those of us who are in it, you just carry on, you learn to adapt to chaotic situations.”

With Toronto’s city clerk warning that administering the vote will be difficult, given that chaos, Ontario’s Progressive Conservative government is renewing its efforts to reduce the size of city council to 25 wards, from 47. Last week, a judge ruled that the government’s attempted size reduction in the middle of a campaign was unconstitutional.

Monday morning, at just after midnight, the Ontario Legislature was to debate a government bill to override that court ruling, invoking the Canadian Constitution’s seldom-used notwithstanding clause. And in a separate move, on Tuesday, government lawyers will ask the Ontario Court of Appeal to stay the court ruling. Meanwhile, about 500 Ontario lawyers and law professors signed two separate petitions this weekend urging Attorney-General Caroline Mulroney and Premier Doug Ford to respect the Constitution and not override the court ruling.

Some candidates, such as Jennifer Hollett, who was an intervener in the court challenge to the reduced council size, said she is running as if there will be 47 wards – in other words, that Mr. Ford’s planned reduction doesn’t happen.

“My commitment and focus has been the 47. That’s the race I’m interested in. It’s the one that I signed up for," she said. And if it doesn’t turn out that way? “Then our campaign team will have to regroup and make a decision on what we’re going to do,” she added.

Ms. Hollett, who is running in a downtown ward, said she has adjusted her campaign by moving her focus away from door-to-door campaigning.

“Normally in a campaign you just focus on the campaign. You’re not having to stand up and fight for democracy. You’re usually celebrating it by just going out and talking to people about the issues. But this is the issue.”

Suzanne Kavanagh, another candidate in the same downtown ward, said she’s laying low while the dust settles. In a 25-ward system, she would be facing two incumbents, as opposed to none in a 47-ward system.

“I’m a pessimist proceeding optimistically,” she said in an interview. “I’m not trying to be gloomy but I have to be realistic. I would rather hold on to my volunteers and their energy until we know for sure.”

Jennifer McKelvie, who is running in Scarborough, said she is prepared for either eventuality.

“I’m enjoying meeting new communities in the larger ward,” she said in an interview. “I continue to have a campaign strategy for both the 25- and the 47-ward scenario."

She said she is fortunate compared to some candidates because the entire area she is running in, in a 47-ward scenario, is also found in a 25-ward scenario. “I would not be losing any geography, I would only be gaining.” One challenge: While she has raised enough money for her campaign in the smaller ward, she needs to do additional fundraising to run a competitive campaign in a larger ward. “But I don’t want to overfundraise and have a surplus because that would be unfair to donors.”

Stephen Holyday, an incumbent running in Etobicoke, said the uncertainty has not had a major impact on his day-to-day campaigning. “There’s nothing that prohibits us from knocking on doors and seeking to put up election signs, which may or may not be joined into this ward in the future.”

“We’re not talking about the important things: building the downtown relief line, having more affordable housing, road safety, supporting our local businesses,” said Brad Bradford, who is running in Beaches-East York. “Those are the issues we should be talking with local residents about.”

Editor’s note: In a previous version of this article it stated that Brad Bradford was running in Scarborough. In fact, he is running in Beaches-East York. 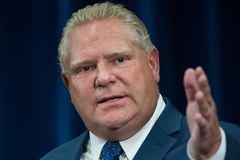 Experts split over Ford’s use of notwithstanding clause
September 12, 2018 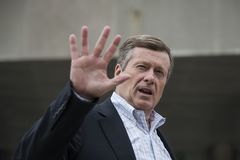