Marcus Gee
Published May 16, 2020 Updated May 16, 2020
Comments
Text Size
Please log in to listen to this story. Also available in French and Mandarin. Log In Create Free Account

Everyone is getting a bailout these days: workers, students, farmers, small businesses, big businesses. Canada’s biggest, richest city is hoping to join them.

Mayor John Tory says Toronto desperately needs help to bounce back from the COVID-19 crisis. It has taken a hit that amounts to $65-million a week. To fill the expected $1.5-billion hole in its annual budget, Mr. Tory says, Toronto would need to raise taxes by 30 per cent or slash services with a meat axe. Neither option is possible if Canada wants “a strong recovery led by cities.”

Running a budget deficit is out, too. Cities aren’t allowed to and Mr. Tory doesn’t want to ask for special permission, because deficits would just kick the can down the road. So he would like to see the provincial and federal governments come to the rescue. For weeks now, he and other mayors across the country have been beseeching senior governments for help.

Cities, he says, can’t possibly be expected to cover the cost of the trouble they are in. It wasn’t their fault that the biggest economic shock in memory knocked the wind out of them. It is not as if they mismanaged their finances and wasted all their money. It just happened. Higher authorities have an obligation to help. With their much bigger coffers and much greater ability to borrow money, it falls to them to bear most of the cost.

He is right to a point. Toronto is in a genuine fix. The pandemic has saddled the city with all sorts of extra costs. It is spending more on everything from overtime to public health to housing the homeless. At the same time, revenue from things such as transit fares, parking fees and land-transfer taxes is way off. With ridership down to about 15 per cent of pre-crisis volumes, the Toronto Transit Commission is losing $20-million a week in fares.

Some emergency aid is clearly in order. Higher governments seem to understand that. At first, Ottawa wondered why provincial authorities, normally so keen to keep the feds off their turf, would come asking for help with cities, which fall under their oversight. Provinces wondered why Ottawa wasn’t stepping up. That round of fiscal fencing seems to be ending. Both levels are making encouraging noises.

But all levels have essentially the same problem: ballooning costs, crashing income. Ottawa’s budget watchdog is warning that his latest forecast of the federal deficit – a mere $252-billion – could prove “very optimistic” considering how much money officials are shovelling out the door. Ontario’s watchdog says the province’s deficit could double to $41-billion, a sum that will be piled on top of an already massive provincial debt.

Someone will have to pick up the tab. The idea that senior governments have some sort of magic credit card is a comforting fantasy. Even they will face a bill for all their spending, as necessary as most of it is. Cities won’t be exempt either. Even if they get their emergency funds, the transfers they get from above are bound to shrink as higher governments wrestle with their debts.

Like every level, cities will need either to cut their spending or raise taxes. Toronto may need to abandon some of its favourite projects, like a proposed downtown park spanning the rail lines. It may see the huge transit build out promised by Premier Doug Ford scaled back.

Whatever path it chooses, it’s unrealistic to think cities will be spared the fiscal impact of this unprecedented crisis. Even if other governments were to cover all of Toronto’s current needs – which seems unlikely, given all the demands on their treasuries – residents would eventually pay through higher provincial and federal taxes or lower levels of service from those governments.

As the saying goes, we are all in this together. As another one has it, there is only one taxpayer. Like or not, we are all going to pay. Federal wage subsidy to be extended for three months
May 15, 2020 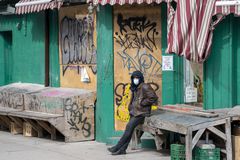