Toronto plans to make an additional 560 beds available to the homeless this winter but advocates warn the spots won’t be enough for the growing number of people living in encampments across the city since the COVID-19 pandemic began.

The increase in beds – 100 of which will be at an exhibition centre, with plastic barriers to prevent the spread of the virus – is part of the city’s winter plan for the homeless outlined earlier this week.

Mary-Anne Bedard, general manager of Toronto’s shelter, support and housing administration, said the city believes it will have enough beds to house those who want to get inside during the cold months.

There will be 240 hotel rooms among the new spaces, along with 220 spots in shelters that will become available when the same number of people move into new homes, including two new modular housing projects, Ms. Bedard said.

“This year, more than ever, we wanted to make sure we were offering a range of different types of services so we can hit as many people we could with a service that they would be comfortable in accepting,” she said.

“There are encampments everywhere and they’re growing – we think over 1,000 people are outside and this only has space for 560.”

Mr. Cook also raised concerns about the 100 new beds the city plans to place in one building on the grounds of the Canadian National Exhibition. COVID-19 has been known to spread easily in congregate settings.

Ms. Bedard said the beds at the respite centre will have L-shaped Plexiglas barriers to help keep people safe.

Cathy Crowe, a long-time street nurse and homeless advocate, said the city’s plan to use plastic barriers between beds is problematic.

“This will give a false sense of security that they’re going to be safe from COVID-19,” she said.

Mr. Cook added that it seemed odd that Toronto’s medical officer of health has asked the province to shut down in-person dining at restaurants while the city approved a plan to have 100 people sleep in a large room.

As of Monday, there have been 650 cases of COVID-19 in Toronto shelters, including seven active cases, and five deaths.

Dozens of encampments have popped up throughout the city since the pandemic began as people fled shelters for fear of COVID-19.

The city’s Streets To Homes team has counted about 400 tents across the city, Ms. Bedard said, a number advocates question.

Ms. Bedard added it’s very difficult to get an accurate number of those living outside if they haven’t used any city service.

“Every neighbourhood is experiencing increased levels of homelessness that are much more visible in their communities,” she said.

The city has undergone a massive rehoming initiative in order to depopulate shelters to allow for proper physical distancing inside. They’ve bought or leased 30 buildings and hotels and have moved about 4,000 people out of shelters since the pandemic began.

They have also moved about 900 people out of encampments into various types of housing, Bedard said.

The city is also defending itself against two lawsuits brought by the homeless and their advocates. One is to ensure proper physical distancing in the shelters while the other is challenging a city bylaw that doesn’t allow camping in parks. 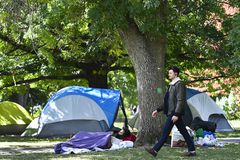