Think of it as assisted reproduction, but to help proliferate a flower that emits perhaps the worst aroma in the plant kingdom – that of a dead body.

Among its other idiosyncrasies, the corpse flower – or Amorphophallus Titanum, in botany parlance – can take up to 10 years to go from seed to flower. It only blooms for a maximum of 36 hours, and in that limited time, attracts inferior pollinators such as carrion beetles and flies, which are not equipped with the same insect anatomy that make bees so good at their job.

But with a little reproductive help from researchers at the Toronto Zoo and McMaster University, these putrid-smelling flowers could have a better shot at cross-pollination – in other words, survival – thanks to cryogenic freezing.

The first corpse flower to ever bloom at the zoo, in September, 2018, gave Mr. Gellatly a chance to collect its pollen and experiment with different ways to preserve the plant’s genetic material.

“It’s a threatened species, so this is really important to lock down those genetics … and hold them for the future,” said Mr. Gellatly, likening September’s bloom to a “horticultural Christmas.”

There have been only a handful corpse-flower blooms across Canada. Native to Sumatra, an island in Indonesia, the Amorphophallus Titanum can grow more the six feet tall. The pale column at its centre, also called a spadix, is a flowering part of the plant and one of the largest in the world.

The column is protected by a large petal, or spathe, that uncloaks the spadix when it blooms. The inner part of the spathe is dark red, and when coupled with the smell of rotting flesh, attracts beetles and flies to pollinate it. (The small flowers that create pollen are located at the bottom of the spadix.)

There is currently no proven method for preserving its pollen. Although Dr. Mastromonaco has mainly worked on reproductive biology in animals over the past 13 years at the zoo, the science of cryopreservation is similar in plants, she said.

“It’s actually further than I thought we would get, especially the cryogenic [freezing],” she said. “We really were aiming in the dark. There’s no protocol, so we read up on possibilities from orchids and other species.”

Some pollen samples from the zoo’s September bloom, aptly named “Pablo ‘Pe Ew’ Caso” (like the painter), were cryogenically frozen in liquid nitrogen. Others were preserved in - 80 C conditions and stowed away.

Then, earlier this month at McMaster University in Hamilton, an opportunity blossomed.

The university’s greenhouse was bracing for its own corpse flower to make a rare appearance, and allowed Toronto Zoo researchers to pollinate it with their frozen samples.

Most plants metaphorically “live a balanced life,” says Susan Dudley of McMaster’s biology department – growing, flowering and creating fruit in a regular cycle. By contrast, Prof. Dudley likened the corpse flower to a reclusive individual who remains trapped indoors for years and splurges all their energy at once.

After the McMaster flower bloomed on July 4, the researchers cut a hole at its base to expose the flowers that would otherwise be pollinated by insects. Using paintbrushes, Mr. Gellatly coated four sections of the flowers with four pollen samples that were frozen under different conditions at the zoo.

It will be at least three weeks before the researchers can say if the pollination took – namely, if the flower’s “berries” have any seeds in them – and early growth indicators on the plant have given them hope.

“But, as in any pregnancy, we’ll say, there’s a lot of steps and plants are actually pretty good at saying conditions are dangerous, or ‘I don’t have the resources to make all these babies so I’m just going to make a few, or none,’ so we just have to watch and see,” Prof. Dudley said. 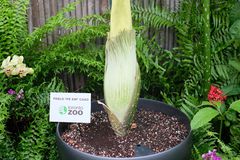