A woman found guilty of terror charges after attacking workers at a Canadian Tire with a golf club and a butcher knife should be sentenced to eight years behind bars, prosecutors argued Thursday.

Though the range of sentences for such offences can go up to 12 years, Crown attorneys said their proposal takes into account Rehab Dughmosh’s mental illness as well as the need to denounce her actions.

“While Ms. Dughmosh’s mental illness contributed in some measure to her commission of the Canadian Tire attack, it does not excuse her conduct entirely and it should not be regarded as the sole or even predominant explanation for her conduct,” Jason Wakely and Jennifer Conroy wrote in their submissions.

“She was driven by a complex mix of motivators, including powerfully held jihadist views.”

The combination of mental illness and extremist views “raises concerns about future dangerousness,” they said. In assessing that risk, the attorneys argued the court should consider how well Dughmosh understands her illness and accepts that she requires treatment.

She has complied with her treatment while in custody, but also shows “fairly poor insight” into her illness and its connection to her crimes, Wakely said in court.

There is hope that treating Dughmosh’s illness will reduce her likelihood of reoffending and “facilitate her eventual reintegration into the community,” but she lacks a strong support network to help her make the transition, he said.

“Her parents and siblings reside abroad. She is in the midst of a divorce. She has few, if any, friends in the community,” the submissions read. “The absence of a domestic support network raises concerns about her prospects for successful rehabilitation and reintegration into the community in the near term.”

Dughmosh is not represented by a lawyer, but the person appointed by the court to assist her said she has shown significant improvement over time and no longer experiences suicidal or homicidal ideation.

The judge overseeing the case is reviewing Dughmosh’s psychiatric assessments and her treatment records from jail in deciding on a sentence. Her decision is expected Feb. 14.

Dughmosh was found guilty of four terrorism-related charges after attacking workers in June 2017 at a Canadian Tire store in east Toronto with a golf club and butcher’s knife while draped in an ISIL banner.

She had also previously tried to travel to Syria to join ISIL, and one of the charges stems from that incident.

An agreed statement of facts was the only evidence presented at trial, and Dughmosh largely declined to participate in the proceedings.

Last week, Dughmosh told the court she disagreed with the statement of facts – particularly the psychiatric assessment in which she is diagnosed with schizophrenia.

But when asked Thursday whether she sought a remedy from the court, Dughmosh said she did not, and Justice Maureen Forestell said there was no basis to interfere with the jury’s verdict.

he Crown is also suggesting Dughmosh be given credit for her time in jail while awaiting trial at a rate of 1.5 days for each day served, which would deduct slightly more than 900 days from her sentence. 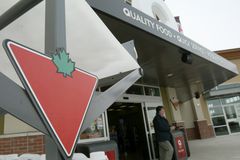 Woman who admitted to attack at Canadian Tire found guilty on terror charges
January 17, 2019
Report an error
Due to technical reasons, we have temporarily removed commenting from our articles. We hope to have this fixed soon. Thank you for your patience. If you are looking to give feedback on our new site, please send it along to feedback@globeandmail.com. If you want to write a letter to the editor, please forward to letters@globeandmail.com.
Comments are closed