Federal Public Safety Minister Ralph Goodale says the Trudeau government will consider the increasing calls for a ban on handguns, an idea endorsed by Toronto council after a mass shooting that shook Canada’s largest city this week.

City council on Tuesday approved the notion of requesting a ban, which Mayor John Tory raised after Sunday’s attack, at the end of a daylong debate on gun violence.

Councillors also approved a package of measures on guns, including funding for programs aimed at keeping young people out of gangs and a controversial system of computerized microphones to monitor some neighbourhoods for gunshots.

Mr. Goodale told reporters in Ottawa that the idea of a handgun ban was also recently brought forward by those affected by the January, 2017, Quebec City mosque shooting, in which six people were killed.

“A number of groups and organizations made representations to that effect earlier this year. I said that we would be prepared to consider their arguments and we will do that,” Mr. Goodale said. “… Public safety is extremely important to all Canadians and we need to make sure that we get this right.

However, Mr. Goodale said any such change to Canada’s handgun laws would require a “significant remodelling” of the Criminal Code.

Asked about the shooting on Toronto’s Danforth Avenue, he said the suspect, 29-year-old Faisal Hussain, who died after an exchange of gunfire with police, had no “national security connection.”

Mr. Hussain is alleged to have walked down the busy street, firing into restaurants full of diners, killing an 18-year-old woman and a 10-year-old girl and injuring 13. His family issued a statement saying he had suffered from psychosis and depression.

Mr. Goodale added that the government’s new firearms bill, which was introduced in March, looks to upgrade the law with respect to background checks. And he said he would raise the issue of a national requirement to report mental-health issues when he meets with public safety and justice ministers this fall.

With the city still reeling from the shooting, council spent the entire day Tuesday on a previously scheduled debate on measures to address gun violence.

Council approved a motion from downtown councillor Joe Cressy asking Ottawa to ban handguns in Toronto and asking the province to ban the sale of ammunition in the city. It also passed motions calling for stricter gun controls, including a ban on assault rifles and semi-automatic firearms. It also called on city bureaucrats to study whether local gun clubs could be closed.

While the flow of illegal guns across the U.S. border remains a problem, Toronto Police Chief Mark Saunders told councillors that about half of the illegal guns police seize now come from domestic sources, often traffickers who buy them legally here and resell them. Mr. Tory moved a series of motions, passed by council, calling on Ottawa to toughen penalties for gun traffickers.

Council also approved a request for about $30-million over six years in federal funding for programs aimed at steering young people away from gangs.

But it also approved more controversial proposals to double the number of police video cameras and install a system of computerized gunshot-locating microphones called ShotSpotter.

Some councillors expressed reservations about the $1.3-million ShotSpotter system, as have black community activists and the Canadian Civil Liberties Association, which has raised privacy and constitutional concerns and warned that installing the system could stigmatize entire communities.

While 90 cities across the United States use the system, it has not been adopted in Canada or previously been contemplated in Toronto, although Mr. Tory met with a lobbyist for the company behind the technology in 2015. Last week, Mr. Tory pushed the idea onto the Police Services Board agenda as a way to deal with a spike in gun violence.

Some councillors accused Mr. Tory and his allies of rushing to enhance police surveillance just to be seen doing something.

“Once again, another tragedy has happened and we are talking about some sort of RoboCop technology that none of us know anything about and want to spend millions of dollars on,” said Councillor Josh Matlow, who called for the redirecting of the money earmarked for ShotSpotter to youth programs.

Chief Saunders told city councillors that the system, which uses a web of rooftop-level microphones to triangulate the exact location of a gunshot, would result in quicker response times in the unnamed neighbourhoods where the system would be deployed – compared to 911 calls.

Critics have cited U.S. court cases in which the system’s recordings have picked up shouts that have been entered as evidence in court – in one case, the name of an accused killer. Chief Saunders echoed the company’s assurances that the system and its microphones are designed to screen out sounds that are not gunshots and would only conceivably record any speech that is very loud and near a gun going off.

Ralph Clark, the CEO of Newark, Calif.-based SST Inc., which markets ShotSpotter, said in an interview that he had not had any direct contact with Toronto police or city officials or submitted a proposal to them.

He said his equipment is less invasive than security cameras, and that several U.S. cities have recently expanded their use of his system, which now covers more than 18,000 hectares in New York.

City Councillor Josh Colle, whose North York ward includes neighbourhoods routinely plagued by gunfire, said many residents there would support more security cameras, and technologies like ShotSpotter: “At every single meeting we have, they say, why aren’t you putting up more cameras? .. I will look at anything. I think that’s the position that most of our residents are in.”

On Toronto’s Danforth, hope for humanity alongside heartbreak
July 26, 2018 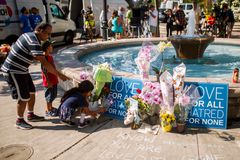 Ontario to use part of mental health funding for police initiatives
July 24, 2018 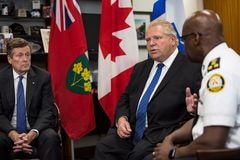 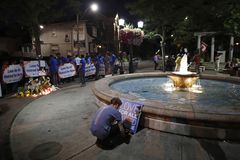