The new site, a converted hotel in the city’s northwest, is due to open on Saturday. Federal Health Minister Patty Hajdu officially announced funding for the facility at an event at City Hall on Friday morning alongside Mayor John Tory, pledging $13.9-million for one year. The hotel will be operated by Toronto Public Health.

The new 140-bed facility is meant to give people from low-income households, who often live with several generations under one roof, a free place to voluntarily self-isolate when they test positive for COVID-19. Similar hotels are operating in Chicago and New York, but Toronto officials say this is Canada’s first.

The idea is to short circuit what health officials say is a worrying source of disease transmission between members of the same households in areas of the city that are disproportionately poor and non-white – and where vulnerable elderly people often live with younger relatives.

“If you get COVID you are told to self-isolate at home, in a separate bedroom and with a bathroom, away from the rest of your family or household,” said Councillor Joe Cressy, who chairs the city’s board of health. “For many Torontonians, the luxury of a home with multiple bedrooms and bathrooms is simply not a reality.”

The new hotel comes as schools across the city are poised to reopen, but with many parents – including large numbers in neighbourhoods harder-hit by COVID-19 – keeping their children out of class for fear of the disease. It is also starting up as health officials look warily toward the likelihood of a second wave of infections this fall.

People who are referred to the hotel by public health after a positive COVID-19 test will get free meals as well as a place to stay for the recommended 14-day isolation period, Mr. Cressy said. Toronto recorded 55 of Ontario’s 170 new COVID-19 infections on Thursday. It was not known how many of those who test positive will need the new quarantine hotel.

Mr. Cressy and Toronto Public Health officials have been lobbying for funding for the facility from both federal and provincial governments since June, after the city released data showing how poor neighbourhoods in the city’s northwest and northeast – parts of Etobicoke and Scarborough – were being hit much harder by the pandemic.

Ms. Hajdu said the federal government was willing to fund other similar facilities in other large cities that request them, but had no immediate plans to do so.

Michael Warner, a critical-care physician at Toronto’s east-end Michael Garron Hospital, said he started advocating for an isolation facility after patients from the same apartment buildings, and even the same units, began showing up with COVID-19 in the early days of the pandemic.

“What we learned is that when you have multigenerational families, or even families with several children living in a small, cramped apartment, it’s impossible for them to isolate effectively,” Dr. Warner said. “… I am very encouraged that there will be a publicly funded venue for people to isolate safely, especially those from marginalized, racialized communities that were hit hardest during the first wave.”

While the provincial government has not committed any cash, Mr. Cressy said Public Health Ontario will still be part of the effort to evaluate the effectiveness of the hotel. He said he was confident that Ontario would agree to help if the program needs to expand.

Toronto has already leased hundreds of hotel rooms to use both as homeless shelters – to allow for physical distancing in its existing system – and as special isolation centres for homeless people who test positive, costing it an estimated $200-million. 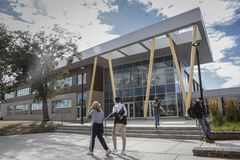