The sudden change of ward boundaries is having a chilling effect on first-time council candidates in Toronto’s upcoming municipal election, with some deciding to withdraw their candidacy following an appeal court decision that cut the size of city council to 25 wards from 47.

Jennifer Hollett, who originally signed up as a candidate under the 47-ward model for an empty seat in a new ward, has dropped her candidacy. In the new system, she’d be running against one of two popular incumbents, Kristyn Wong-Tam or Joe Cressy.

“It’s really challenging to take on an incumbent in the best of times, let alone in my case. Kristyn is a mentor and a friend,” Ms. Hollett said Thursday. “Joe Cressy is one of the councillors who actively encouraged me to think about municipal politics.”

School board trustees Ausma Malik and Chris Moise have also backed away from their earlier announcements to run for council, with Mr. Moise re-registering in the Trustee race.

This election will see incumbent councillors pitted against each other in nearly every race as many of the 25 new wards – based off federal and provincial riding boundaries – will combine at least two existing wards. The fight over the size of city council has been a back-and-forth saga that’s kept MPPs awake into the wee hours of the night and raised alarms for Toronto’s city clerk over her ability to administer a fair election in time for the Oct. 22 deadline.

Now that there’s clarity, the incumbent-versus-incumbent match-ups have created a difficult situation for new candidates. Even the incumbents have pointed out the uphill battle newbies are facing.

“It’s so incredibly unfortunate, so unfair to people that have put their hats in to run,” said councillor Mike Layton, who is running in the new ward University-Rosedale. “I think we’re losing some good candidates. I think it’s also turning some people off politics in general.” Councillor Paula Fletcher, running in Toronto-Danforth, said 47 wards would have “opened up the field,” heralding in three new seats with plenty of new faces and “great diversity.”

Experts say incumbents are often re-elected unless there’s a glaring reason they shouldn’t be. When there are two incumbents to unseat, it’s even more difficult.

“I don’t think you’ll see many new faces. That’s the only logical conclusion at this point,” said Gabriel Eidelman, director of the Urban Policy lab at the University of Toronto. “For challengers, it’s a much harder fight for them right now.”

The issues facing new candidates range from poor name recognition to difficulties with fundraising and resources. Some non-incumbents still have some advantages, like George Smitherman, who will be facing Ms. Wong-Tam.

Mr. Smitherman is a former Ontario cabinet minister, and a previous candidate for mayor of Toronto. He believes he has an advantage over Ms. Wong-Tam, despite coming from outside council, because of his time representing Toronto Centre at Queen’s Park. Voters will recognize his name on a ballot, he believes, though he still pointed to incumbents’ salaries and staff resources as advantages in the races.

He has somewhat of an edge with volunteers, he said, because he can call old supporters and Liberal “alumni” to campaign for him. He doesn’t expect much of an issue with fundraising, either.

But for candidates without prior public office experience, money is one of the biggest hurdles.

Lauralyn Johnston, a Toronto urban planner running against incumbent Christin Carmichael Greb for Ward 8, said she’s taken a leave from her job since June 18. “It’s a long race, so it’s a lot of salary that I’m missing. Also my benefits, also pensionable time,” she said. The race was always supposed to be against Ms. Carmichael Greb, but the 25-ward system means she’s now running against Michael Colle, too, the provincial politician and father of incumbent councillor, Josh Colle, who has decided not to run again.

Councillor John Campbell took to Twitter on Thursday, saying a candidate in the 25-ward system can now spend $73,000. “Who could possibly raise [that] kind of dough?” he wrote.

Speaking to reporters in the morning, Mr. Campbell noted that “it’ll be very difficult, if not impossible, to defeat an incumbent” in the coming election.

Still, some are prepared to put up a fight. Winston Park, a Willowdale candidate running against incumbent John Filion, said any difficulties he’s facing will be a challenge for everyone else, too. 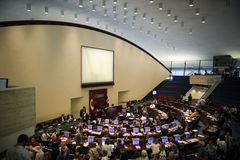 Explainer
Toronto’s municipal election is today. Here’s what you need to know
October 22, 2018 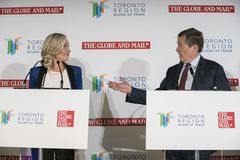 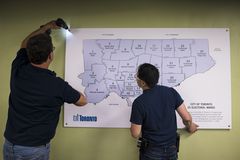