Cleaners were removing large bloodstains splattered along the hallway of a Toronto residential building on Thursday after a shooting that sent five teenagers to hospital, some in critical condition.

Police said the victims – a 16-year-old girl, a 17-year-old girl and three boys between the ages of 16 and 18 – were expected to survive. One of the teens underwent surgery overnight, police said.

The group was wounded when two people opened fire in the hallway of the building in the city’s west end around 7:30 p.m. on Wednesday, police said.

Investigators were searching Thursday for three suspects, who police described as males in their late teens and early 20s, who were driving a dark sedan before the shooting. They said they found at least 20 bullet casings at the scene.

Some residents inside the building looked visibly shaken on Thursday as they went about their day and skirted past the lingering signs of the previous night’s violence.

What appeared to be bullet holes could be seen in the building’s rear entrance and marring the hallway doors and the walls of a nearby stairwell.

Police Chief Mark Saunders said officers will be looking at video surveillance footage in the area to help identify the suspects.

“We have five who were shot, they are very young people and there is no need for this to happen,” Chief Saunders said Wednesday night, adding that the victims were targeted.

Chief Saunders and Mayor John Tory have repeatedly called for a city-wide handgun ban as Toronto grapples with a rise in shootings.

“There is the concern of retribution and so if there is going to be any type of retribution, then that would add to our count and that is something that is concerning,” said Chief Saunders, who asked the public for tips to help the investigation.

Police said 235 people have been shot in the city so far this year.

Chief Saunders announced Thursday that an 11-week project launched this summer in an effort to address the spike in gun crime has been renewed, although no new money has been allocated.

All three levels of government provided a total of $4.5-million to fund Project Community Space, which involves increased police presence in areas associated with street gangs, as well as monitoring of bail compliance.

In order to effectively tackle gun violence, officials need to treat it like a public health issue rather than a criminal issue, one expert on the matter said.

“If we look at it simply as a crime problem, we’re going to respond to it with Band-Aid solutions, reactive solutions, as we have been,” said Akwasi Owusu-Bempah, an assistant professor of sociology at the University of Toronto.

There needs to be the political and public will to address factors such as poverty and racial discrimination, and to put in community supports that create an environment where gun violence is less likely to emerge, he said.

One of the hurdles is that funding for community programs aimed at youth is still granted for only short periods, typically three to four years, Prof. Owusu-Bempah said. As a result, those organizations are constantly struggling to remain operational, which affects their ability to build lasting relationships with the people they are supposed to serve, he said.

Prof. Owusu-Bempah said there should be a national system to fund community organizations over extended periods of time, and allow schools and community centres to stay open late to provide activities and development opportunities for young people.

“Many parents can barely afford daycare, so if you’ve got a few young children, the idea of being able to send your child to play some kind of sport that might be expensive or engage in extracurricular activities … is out of the reach of many people and it’s becoming more so,” he said.

“When you combine the fact that parents might be out of the house for long hours trying to make ends meet, so you’ve got children that are unsupervised with unstructured time, we can start to kind of see why these problems might exist.”

A spokeswoman for the City of Toronto said there are a number of programs in place for young people vulnerable to gun violence, including some aimed at prevention and others at helping them acquire skills and obtain employment. 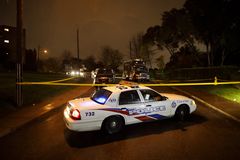