Like one-buck beer and a 10-cent discount on gas, cutting the size of Toronto’s city council is a crowd-pleaser. Cheaper beer and fuel. Great! Fewer politicians. Wonderful!

In fact, this is a bad idea – hasty, undemocratic and unnecessary.

Halving the number of councillors was at the top of Rob Ford’s to-do list when he became mayor in 2010. He had spent years on council ranting about councillors’ perks and privileges – regal luxuries such as free sandwiches at late-night meetings. He wanted to cut council down to size. His fellow councillors thwarted him. His brother, Doug, said asking them to cut the size of council was like asking turkeys to vote for Thanksgiving.

Well, five years later, heeeeere’s Dougie, coming through the door with an axe to relieve many of those gobbling councillors of their heads. Now that he’s Premier, Mr. Ford can fulfill his late brother’s promise and show the barnyard who’s boss.

It’s vindictive and, what’s worse, wasteful. Toronto has just finished redrawing its ward boundaries to account for shifts in the city’s population, increasing the number of wards to 47 from 44. All that work now goes out the window. So does all the preparation electoral officials have done for a 47-ward election and all the hours that candidates have already put into getting elected under the existing system. Mr. Ford is changing the rules in the middle of the game.

By acting so precipitously, just three months before the Oct. 22 election, he has left no time for debate. Though he has always favoured the idea, he didn’t run on it this spring, so it wasn’t chewed over in the provincial election campaign. Imagine if a prime minister announced three months before a federal election that they decided to halve the House of Commons. Unthinkable. As Toronto Mayor John Tory put it, “it isn’t right and it isn’t fair” to ram such a big change down the city’s throat with no consultation. He wants at least a referendum on the issue.

Mr. Ford might get a pass for causing all this tumult if Toronto council were hopelessly bloated. It isn’t. Forty-four councillors is not that many for a city of nearly three million people.

Toronto had more than 100 politicians before a previous Progressive Conservative government amalgamated Toronto municipalities into one “megacity” in 1998. That number fell to 57, then 44. Bringing the figure down to 25 means councillors will have less time to juggle the concerns and complaints of their constituents – the hands-on customer-service that Rob Ford built his career on. City councillors are the go-to politicians when residents have trouble getting their trash picked up or a noisy local bar to pipe down.

Apart from attending to constituents and showing up for monthly city council meetings, councillors usually sit on several boards and committees. Cut their numbers in half and you risk leaving them swamped and, as a result, less effective at their jobs. It mean less oversight for agencies such as the Toronto Transit Commission and Toronto Hydro.

Councillors make about $110,000 a year, so cutting their number by 20 or so will not save much. Mr. Ford puts the saving at $25-million over four years, a modest amount for a city with an annual budget of $11-billion. Nor is there any reason to think 25 people will make decisions more swiftly or wisely than 44. Village councils sometime find themselves gridlocked. So does the U.S. House of Representatives, with its 435 members. Size doesn’t have much to do with it.

Of course, the Tories will swear this is not just about getting even. It is merely a coincidence that, along with putting many of his old council rivals out of a job, Mr. Ford is cancelling elections in two Ontario regions where political foes – Steven Del Duca and Patrick Brown – are running. Believe that if you will.

But even if the motive was pristine and the change justifiable, the way he is going about it would be wrong. Mr. Ford claims to run a government “for the people.” If you’re really for the people, you don’t push through such a big change to the structure of their local democracy without even bothering to ask what they think. 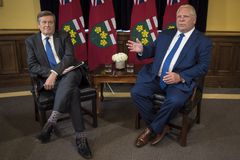 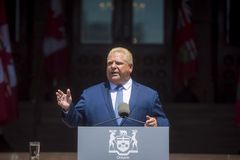