A teen pleaded not guilty to sexually assaulting two students with a broom at a prestigious Toronto high school as his trial got under way Wednesday.

Four teens have already pleaded guilty in the case.

Court previously heard there were two sexual assaults at the school in 2018 when boys involved with a school football team pinned down two different victims and sexually assaulted them with a broom handle in a locker room.

Detective Constable Daniel Sunghing, with the Toronto police sex crimes unit, and Crown attorney Erin McNamara began the trial by showing a video of the room where one incident is alleged to have occurred on Nov. 7, 2018.

The video, taken by Det. Constable Sunghing’s partner after police began investigating, shows a broom under a bench next to a locker.

“The broom, we believe, is the broom that was used in the events,” Det. Constable Sunghing said.

That video, played in court, shows football players walking into the locker room at 6:19 p.m. The room, in the school’s basement, has only one way in or out.

Det. Constable Sunghing identified the complainant and a teen he said was the accused walking down the stairs and going into the room at 6:32 p.m.

None of those involved in the alleged attack can be named under provisions of the Youth Criminal Justice Act.

Police began investigating after being made aware of a video allegedly showing a sexual assault in the locker room. Det. Constable Sunghing said he visited the school with his partner, spoke to the principal and then examined the locker room. He interviewed the first complainant the next day.

The proceedings on Wednesday morning were plagued by technical issues showing the videos, which stalled several dozen times and prompted an early recess.

One of them also pleaded guilty to making child pornography for recording one of the sex assaults – the Nov. 7 incident – in a video that was then shared widely.

Charges against two other students were dropped, while another student received a two-year probationary sentence with no jail time after pleading guilty. 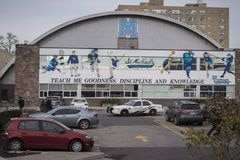