Carl Demarco, a Toronto businessman and former executive with World Wrestling Entertainment, is among those involved in bids to redevelop Ontario Place, the defunct amusement park on Toronto’s waterfront that Premier Doug Ford wants to transform into a “world-class” attraction.

Just what Mr. Demarco − the former long-time head of WWE’s Canadian operations and its president of global business development until 2009 − has in mind remains under wraps. He and the other bidders submitting competing proposals for the 68-acre site have all had to sign non-disclosure agreements as part of the process.

Ontario Place’s future is a key file for Mr. Ford, who championed failed moves to put a Ferris wheel and a football stadium on the waterfront during his brother Rob Ford’s term as Toronto’s mayor. After months of speculation about a potential casino at Ontario Place − and vocal opposition from Toronto Mayor John Tory and others − the government ruled out gambling or residential uses.

In addition to Mr. Demarco’s, proposals are expected from bidders who participated in a similar competition under the previous Liberal government, a process scrapped after last year’s provincial election. Among them are Therme Group, a Vienna-based operator of large European spa facilities, and Ken Tanenbaum, a major Toronto developer who has previously unveiled proposals that would move the Ontario Science Centre to the site and surround it with parkland. Neither would comment when contacted by The Globe and Mail, citing the confidentiality rules.

Just last week, potential bidders were told the submission deadline was being extended from Tuesday, Sept. 3 to Sept. 24. Derek Rowland, a spokesman for Ontario Tourism Minister Lisa MacLeod, said in an e-mail that some participants had asked for more time.

Mr. Demarco, a former manager of Calgary-born wrestler Bret (the Hitman) Hart, referred a request for comment to a lawyer, Nick Macos. Mr. Macos confirmed that the former wrestling executive was a “participant in the process” but would provide few details, citing the confidentiality agreement.

Mr. Macos said Mr. Demarco’s bid had assembled a “complete team” and would meet the province’s criteria for a year-round "world-class, iconic development” that would attract international visitors. He also suggested it was not related to wrestling.

“It’s not going to be a smackdown,” Mr. Macos said.

The documents calling for development proposals that the government released in May say the new Ontario Place should be a “spectacular destination that will attract local and international visitors” that could include “landmarks such as recreational and sports facilities, public spaces and parks, retail and entertainment attractions.”

The documents point to Mr. Ford’s redrawing of Toronto’s subway plans to include a new line that terminates near Ontario Place as a vital transit link. While they say no taxpayer subsidies are on offer, the bid documents also say the government will first render Ontario Place − which lacks water and sewage and other services for larger-scale buildings − ready for development. The cost, one source familiar with the process said, could run into the tens of millions of dollars.

Lobbyists acting for Therme, the Austrian spa operator, have been seeking meetings with Toronto city councillors and the mayor’s office in recent weeks. The company’s proposal in the previous round, under the Liberals, would have involved the creation of a new sandy children’s beach, as well as a European-style spa complex for adults, one source told The Globe last year.

Mr. Tanenbaum, vice-chairman of Kilmer Van Nostrand and Co. and son of Maple Leaf Sports & Entertainment Ltd. chairman Larry Tanenbaum, declined to comment for this story. His previous proposal called for the construction of an educational campus and a large park, but would have required government investment. He unveiled another similar concept earlier this year, before the bidding process began, that included a relocated Ontario Science Centre and called for better integration with Exhibition Place.

The province says it plans to lease, not sell, the land. The open-ended process also allows the government to enter into talks with any bidder, combine elements of different bids or reject all that come forward.

While casinos and condos are out, a hotel is possible, as is retail. And the existing buildings – the golf ball-like Imax theatre Cinesphere and the “pods” that extend over the water – do not have to be maintained. However, the call-for-development documents note that Ontario Place has been recognized “under the Ontario Heritage Act as a provincially significant heritage property.” Maintaining free public access is not required, either.

Bidders must leave in place the existing music venue, the Budweiser Stage, which has a lease that could last until 2030. And if a proponent wants to wipe out the recently completed Trillium Park on the east side of the grounds, they must replace that 7.5 acres of parkland elsewhere. A marina must also be maintained.

Local activists want more of Ontario Place turned into parkland and kept open to the public. Suzanne Kavanagh, of the group Waterfront For All, said the new Trillium Park is well-used by the many new residents who live in Toronto’s booming downtown. She said the process so far has been too opaque, with no input from citizens.

“There’s lots of rumours out there flying. We’re hearing everything from an adult-style Great Wolf Lodge to a New Jersey Meadowlands coliseum, everything in between,” Ms. Kavanagh said. “But again, when these people put in their applications, everyone has to sign a non-disclosure agreement, so we don’t really get to hear anything.”

Opinion
Why save Ontario Place? For the sake of beauty – and cold cash Subscriber content
July 10, 2019 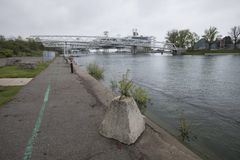 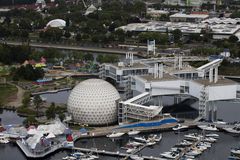 Ontario Place is more than a payday, it’s a bridge between centuries and generations
February 1, 2019 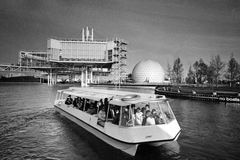