Family, friends and several thousand members of police forces from across the country gathered in Toronto on Monday to say goodbye to an officer who died in the line of duty.

They remembered Constable Jeffrey Northrup as an energetic man who was excited about getting back in the field to help train young officers and someone who cared deeply about his family, co-workers and community.

Officers on foot, horseback and motorcycle, along with a marching band, made their way through the streets of Toronto in a procession before arriving at a vast stadium where Constable Northrup’s funeral was held. They stood in silence, three seats apart, for nearly 10 minutes as his casket was brought to one end. Only the sound of squawking seagulls filled the air.

Constable Northrup’s widow described her husband as a man with a kind heart, calm demeanour and an ability to make others smile.

“Jeffy, boo bear, I am so grateful to have had you in my life for 28 years,” Margaret Northrup said in her eulogy.

“You were my knight, my strength, and my best friend. We were so in sync with each other. I am lost without you, however, I will remain strong with you still in my heart and by my side.”

Constable Northrup worked with Toronto police for 31 years. He was first a court officer before being hired as a full-fledged officer with the force in 1999.

The 55-year-old was killed on July 2 in what investigators have called a deliberate act while he was responding to a report of a robbery in a parking lot at Toronto City Hall earlier this month.

Investigators said he died after being struck by a vehicle. A 31-year-old man has been charged with first-degree murder.

His wife spoke about their early days together.

“Jeff and I met in jail,” she said with a grin, explaining that she worked as a nurse and gave out medication to inmates headed to court, while he would handcuff them at the end of the day to bring them back to jail.

Before their first date, she asked a mutual friend what he was like.

“He makes great brownies,” Ms. Northrup recalled her friend saying. She said she’d often wake up at 3 a.m. over the years to the smell of brownies her husband was making to bring into the office.

Constable Northrup leaves behind three children. He helped coach lacrosse for his two boys and volunteered with his daughter’s Special Olympics T-ball team, his wife said.

And he loved work, she said.

“Jeff was happiest when he made people feel good,” she said.

Superintendent Greg Cole of the force’s 52 Division, where Constable Northrup was stationed, called the officer a “gentle giant.”

“When you were around Jeff, it was hard to be in a bad mood,” Supt. Cole said.

While on the force, Constable Northrup had found a new love: detective work.

“He was a tenacious and energetic investigator, tirelessly scouring the streets and back alleys and taking the time to comfort and console victims,” Supt. Cole said.

In April, Constable Northrup left his desk job to go back onto the road to coach younger officers.

“He was excited to get back into the action,” his wife said.

“On the rare occasion where he did seem to be mad, there was always a smirk lying in wait, followed by a huge bear hug and a chuckle,” Supt. Cole said.

He’d often get into work early, Supt. Cole said, and would whip up a meal, like chili, so his team wouldn’t hit the road on an empty stomach.

“Jeff loved his job, and as we have heard repeatedly this past week, he did it with diligence and dedication,” Chief Ramer said. “But knowing that he died doing the job he loved doesn’t make his death any less tragic.”

“He put his life on the line in order to serve and protect his community and this is a debt that will not be repaid,” Mr. Ford said.

Constable Northrup’s funeral drew officers from across the country to Toronto, including members of the Ontario Provincial Police, the RCMP and forces in Calgary and Vancouver. They dotted BMO Field, where the funeral was held, many wearing black face masks with Constable Northrup’s badge number.

Supt. Cole, Constable Northrup’s boss, recalled another dark day in January, 2011, when Sergeant Ryan Russell died after being hit by a man driving a snowplow trying to evade police. On that day, Constable Northrup – who wasn’t scheduled to work – came in to comfort other officers, Supt. Cole said.

“Meet with the team regarding the loss of Sgt. Ryan Russell, help out in station with what I can,” Constable Northrup wrote in his notebook, a photograph of which was shown on the stadium’s big screen.

“That was our Jeff,” Supt. Cole said. “Always giving in any way he could.” 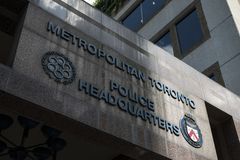