In Toronto, you might immediately suggest a gabled Victorian house. You would not, probably, think of the St. Lawrence Centre for the Arts. Built in 1970, this Brutalist complex in the downtown is a legacy of the Centennial boom in Canadian culture. Now it is beat-up and unloved. The public agency that runs it wants to tear down the 70,000-square-foot building and replace it.

Tura Cousins Wilson has a better idea. I asked the architect, a partner in the talented young firm SOCA Design, for his view on the building – he thinks the centre deserves to be saved, and came up with a design to renovate and expand it. “Can a contemporary arts institution reimagine itself, without purging the past?” he asks.

The answer is yes. Mr. Cousins Wilson’s design provides a model of how we should be approaching Modernist public buildings: with a critical eye and creativity about how to renovate and build on them.

The SLCA, designed by Toronto architects Gordon S. Adamson and Associates, is in the Brutalist style. This is frank, concrete-heavy Modern architecture. It faces Front Street with walls of cast-in-place concrete, which bears the grain of the wood that was used to form it. Above, the building steps back to a set of skylights and a penthouse that has a birdlike profile. It is a tough, sculptural and carefully composed work of architecture.

It consists largely of two large performance spaces, whose size, proportions and technical amenities all present problems. Its owner, the City of Toronto agency TOLive, has a plan to tear it down and build a new cultural complex with a budget near $200-million. (It doesn’t yet have most of this money.)

Mr. Cousins Wilson’s idea is to keep most of the exterior façades; gut-renovate and reconfigure the two theatres, and then make a big move: Extend the building straight up. His design replaces the building’s northwest corner with public rooms. A new lobby faces Front Street; a second-level lobby looks out, through a new window wall, along the axis of the street across downtown; and the third-level event space overlooks a rooftop terrace.

From here, the building rises to include a new black-box theatre, rehearsal space, back-of-house and offices. This tower is wrapped in a thin layer of brick tiles, which contrast the concrete and nod to the architectural history of Toronto’s Old Town neighbourhood. In a rendering by Norm Li, it is a striking addition to the block and the city.

His design creates most of the spaces that TOLive is now looking for, while also delivering full physical accessibility.

More to the point: It’s the right thing to do. “There is a lot of value on this site, both in an environmental sense and a cultural sense,” Mr. Cousins Wilson says. “We should figure out how to work with what we have.”

The SLCA was a Centennial Project, one in a wave of cultural buildings that the federal government funded in the years around 1967. This period saw a huge push of Canadian cultural nationalism, and it was important for architecture.

The SLCA has sixties siblings from coast to coast, including the National Arts Centre in Ottawa. It is another Brutalist building that was recently spruced up and expanded – it’s not perfect, in my view, but it has been widely applauded.

TOLive’s management isn’t trying to find out. They now have a mandate (rubber-stamped by an incurious city council) to proceed with their strategy to demolish and replace.

That is a problem, since the centre is a listed heritage building, cited as a “landmark” in the city’s heritage conservation district policy. “Modern heritage is just not treated with the same deference as Victorian heritage,” Mr. Cousins Wilson explains. Sad but true. The city’s head of heritage planning, Mary MacDonald, is not willing to say anything decisive about the project, even as it continues to roll toward demolition.

Why demolish? TOLive has said it will cost $42-million just to make the current building accessible and get it in good shape. This is a misleading number, and it includes maintenance they haven’t done in recent years.

The truth is that they’ve been letting it run down, and don’t want to save it. Many staff dislike the building. Mr. Cousins Wilson says that this is a familiar dynamic. “Buildings of this age have real issues, like a lack of accessibility and antiquated building systems,” he said. “But that is often equated with a lack of architectural value.” That’s especially true, he adds, when the original architecture has been poorly maintained and altered.

Which the SLCA has. Modern buildings often depend on details. Muck up a few things, and the beauty fades.

Now TOLive wants a flashy new piece of architecture, paid for with public funds and private donations. They recently engaged prominent New York architects WORKac to create a video about the centre’s future.

But an incremental remaking of the centre, as Mr. Cousins Wilson suggests, would have its own appeal. It could be a bold work of contemporary architecture that builds on our Brutalist history – and conserves huge amounts of materials and energy in the process.

This is the right thing to do. The city, the province and the country have a legacy of 20th-century public architecture, products of an era when government did big things and commissioned bold buildings.

And, as Mr. Cousins Wilson argues, every era has something to offer. “What we deem as good architecture is very much subjective,” he says. “And layers are what makes a city special. There’s a complexity to that, rather than doing something entirely new each generation.”

Editor’s note: An earlier version of this story incorrectly stated that the roof of the St. Lawrence Centre had not been replaced since the 1990s. In fact it was replaced in 2019.

Opinion
Two distinct plans for Toronto’s railway lands reveal opposing visions for what the city’s downtown could be
May 18, 2021 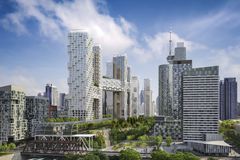 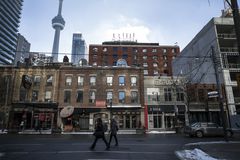 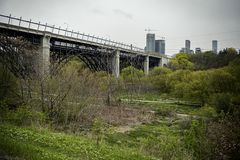