A mass shooting in Toronto’s Danforth Avenue Sunday night killed two victims and wounded 13 others. The shooter is also dead. As victims continue to receive care in hospitals across the city, here’s what Torontonians are doing around the city to help:

A GoFundMe page has been set up to help the victims of last night’s shooting with unforeseen expenses. Keiley Routledge, a long-time resident of the Danforth area and a business owner, said she started the fundraiser to help her neighbourhood.

“There’s a possibility these people are our neighbours. Even if they’re not, it doesn’t matter,” said Ms. Routledge, 53. “Our Danforth neighbourhood … is so intertwined and so knit together that we care so much about people.”

Ms. Routledge said she heard some of the gunshots from her home just off Danforth Avenue, and rushed to the busy strip after her daughter called her to let her know she was in a bar and was unharmed.

“I grabbed her and gave her a giant hug,” she said.

According to the GoFundMe page, Ms. Routledge is working with Toronto-Danforth city councillors Paula Fletcher and Mary Fragedakis to direct funds once the campaign is closed. Some of the funds will be used to pay for the funerals of the two victims killed, whom police have identified as an 18-year-old woman from Toronto and a 10-year-old girl from the Greater Toronto Area.

A program running out of Sunnybrook Health Sciences Centre in Toronto – the first of its kind in Canada – teaches civilians how to respond if they find themselves with a victim who is bleeding severely.

Sharon Ramagnano, a nurse and manager of Trauma Services at Sunnybrook, started “Stop the Bleed” with the help of Dr. Avery Nathens. The program is modelled after similar ones that are in place across the United States, with the purpose of teaching civilians how to provide appropriate care in case of mass shootings and other instances that can lead to traumatic injuries.

Ms. Ramagnano said more than 500 people have been trained since the program’s launch in November, including Metrolinx employees and other public service providers.

Bystanders are often the first responders during a mass shooting, Ms. Ramagnano said. A person can bleed to death in four to five minutes, so it is crucial to provide quick and appropriate support. CPR is often the go-to for help, but it can cause a victim to bleed quicker if their wound is not dealt with first, she said.

The two-hour course is offered once a month at Sunnybrook, and the next session will be held Tuesday. Ms. Ramagnano said she encourages civilians to reach out and learn an easy skill that is “very powerful” and can save someone’s life.

The Canadian Blood Services say they are closely monitoring response efforts in Toronto in the aftermath of the Danforth shooting.

A number of permanent and mobile blood-donor clinics are running throughout the week, spokesperson Hailu Mulatu said.

"In an event like this we would increase our capacity in our existing clinics, because we realize there could be an influx of donors,” Mr. Mulatu said, and added he encourages those who are looking to donate to find the clinic closest to them through their website.

Mr. Mulatu said yesterday’s shooting is “a reminder that things can change in an instant, and regular blood donation throughout the year would enable us to respond to emergencies like this immediately.” 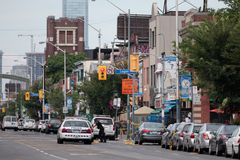 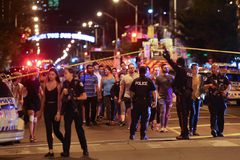 Follow Nadine Yousif on Twitter @nadineyousif_
Report an error Editorial code of conduct
Due to technical reasons, we have temporarily removed commenting from our articles. We hope to have this fixed soon. Thank you for your patience. If you are looking to give feedback on our new site, please send it along to feedback@globeandmail.com. If you want to write a letter to the editor, please forward to letters@globeandmail.com.
Comments are closed