With the Ontario government winning a court decision in its battle to cut Toronto city council from 47 seats to 25, many long-time councillors now find themselves facing off against other incumbents ahead of the Oct. 22 municipal vote.

Almost every one of the new, larger wards will feature two incumbents running against each other. Some candidates have already stepped away, allowing their colleagues to run unhindered by another incumbent, such as Councillor Sarah Doucette, who would have had to run against Gord Perks.

The dynamics of individual ward races will continue to change in the next few days as more people register to run for a council seat. Currently, a number of downtown incumbents have not yet declared which ward they will run in.

And while the political path ahead is still foggy, here are some key races to watch. (Go here for a detailed guide on the Toronto election.) 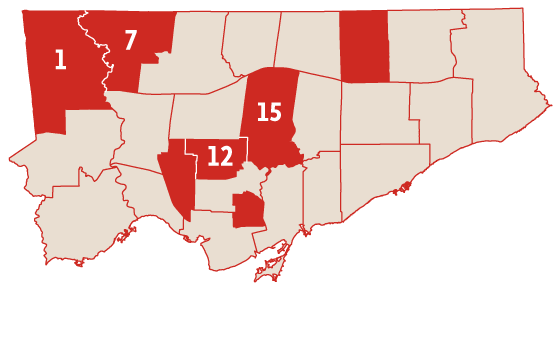 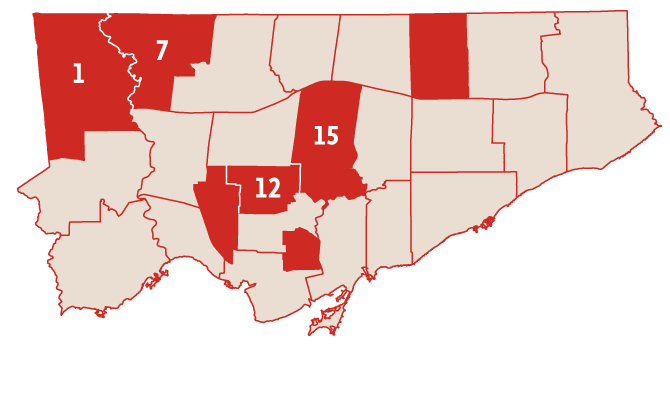 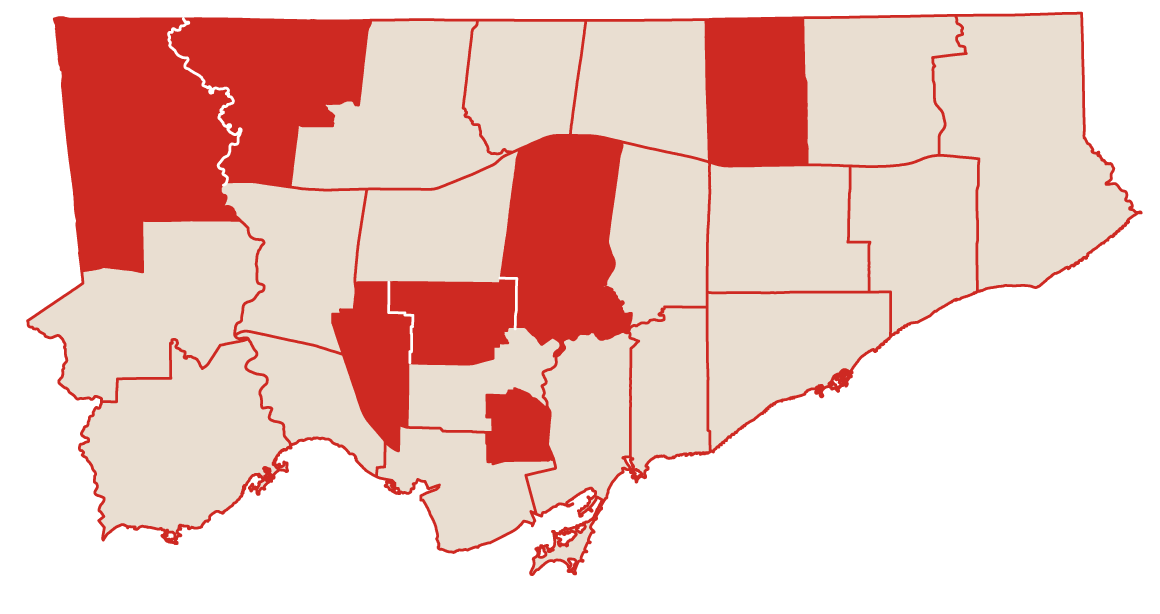 TRISH McALASTER / THE GLOBE AND MAIL; SOURCE: CITY OF TORONTO

Mr. Mammoliti, one of Premier Doug Ford’s strongest supporters on council, will be running against fellow councillor Mr. Perruzza.

Mr. Peruzza said he expects the issues they’ll be sparring over will be local. “My street’s not clean, things aren’t working very well, the park needs to be redone, the roads need to be resurfaced,” he said.

He acknowledged that both men have strong support from their bases.

Mr. Mammoliti did not respond to a request for comment from The Globe and Mail before deadline on Wednesday.

It’s a battle of Doug Ford allies in Etobicoke North, as half-term councillor Michael Ford – the Premier’s nephew – will be sparring with Mr. Crisanti.

“[Michael] is running without a lot of political experience, but he’s got a name. That name may well be enough. It makes it interesting,” Prof. Kay said. Michael Ford won his seat in a by-election held in 2016 to fill the vacancy left by the late Rob Ford.

Mr. Crisanti won his ward by a sizable margin in 2014. Previously, he beat a three-term incumbent in 2010 and campaigned on simple issues such as broken buses, potholes and taxes.

In Willowdale, Mr. Filion announced his intention to retire this year and back a new candidate. But when the ward got bigger, his candidate backed out and Mr. Filion rejoined the race. He won last time with 14,128 votes. The runner-up, David Mousavi, received 7,951 votes.

“There were candidates that were running to take my place that would do a fine job. But then the world changed," Mr. Filion said.

He believes he’ll be the only incumbent running in Willowdale.

It’ll be Mr. Burnside’s first race as an incumbent as he squares off in the new Ward 15, Don Valley West, against two-term councillor Ms. Robinson. Both are allies of incumbent mayoral candidate John Tory. Mr. Burnside will face a tough squeeze, with only a small part of his old ward inside the new boundaries.

Mr. Burnside sees himself and Ms. Robinson as “well entrenched” in their wards, with fairly similar outlooks and positions. Their challenge now is to differentiate themselves.

Ward 9 will also feature a showdown between two veteran councillors. Ms. Bailão, who has been a deputy mayor under Mr. Tory, will be squaring off against Mr. Palacio, an 18-year council veteran and Ford loyalist.

Ms. Bailão sees the upcoming race as a chance for voters to compare their track records as well as their visions for the future.

“This is not about incumbents facing off against each other but rather about representing the people,” she said.

In the previous election, both councillors won their seats by narrow margins – less than a thousand votes.

One ward that will certainly see a fierce battle between incumbents is Scarborough-Agincourt. Mr. Karygiannis has head his seat for one term, while Mr. Kelly has held his since 1997.

Mr. Kelly rose to prominence under mayor Rob Ford, when he was the deputy mayor, and has picked up a Twitter following of almost 750,000.

Mr. Karygiannis has a high profile in his ward after being the MP for almost three decades.

The pair have been critical of each other, with Mr. Karygiannis accusing his opponent of “mud-slinging” in an interview Wednesday. “That is news to me,” Mr. Kelly responded by e-mail. Without using names, Mr. Kelly said he was up against a high-profile opponent who was “light on the record side.”

Prof. Kay says the Scarborough-Agincourt race will be a particularly interesting one because, “based on the numbers from last time, Kelly’s margin is substantially bigger than Karygiannis’s," despite both carrying their respective wards “quite substantially.”

Mr. Mihevc, a long-time left-wing councillor, has been around City Hall since Toronto amalgamated. The boundary change will pit him against Mr. Matlow, a two-term councillor.

Mr. Matlow won in his ward by a substantial margin last time, “one of the biggest in the city," according to Prof. Kay.

But Mr. Mihevc is similarly popular with his own constituents, making the race a toss-up. The new ward features half of each of the incumbents' previous wards.

Voters can expect some of the same issues to crop up in both candidates' campaigning, as they have fiercely weighed in on Toronto’s complex transit file in the past.