Comments once made by John Tory – about white privilege and about his visceral description of shooting suspects – took centre stage during a mayoral debate on Monday night that focused on issues in Toronto’s black community.

Mr. Tory’s denial of the existence of white privilege during the previous mayoral election was recalled by an audience member during the open question period but the mayor said he has changed his mind.

“I can honestly say that you live and you learn, and let me say off the top, white privilege does exist,” Mr. Tory said, noting the statements were made “several years ago” and that he had learned better since that time.

The roughly two-hour discussion covered issues ranging from community safety and policing to affordable transit and housing. Mr. Tory faced criticism from audience members on issues such as the school resource officer program, a controversial system that embedded police officers in Toronto schools, and his response to the province’s recent cuts to Toronto’s city council.

Mr. Tory did not elaborate on the school resource officer program in his answer, focusing on the issue of council cuts. The audience member had accused Mr. Tory of “waffling” on his response, and pointed out that the 25-ward system led to many council candidates of colour and women dropping out of the races. Cries of “shame” echoed through the room as Mr. Tory replied that he did everything he could.

The same audience member asked Mr. Tory to explain comments he made about a playground shooting in Toronto’s east end earlier this year – specifically, when the mayor called the suspects “sewer rats.”

Mr. Tory replied that he wouldn’t apologize for being angry after two young girls were shot. He said he was “not going to speak kindly” about anyone who showed up at a playground with a weapon.

But he added: “I understand and appreciate how those words might have been interpreted.”

Mr. Tory also found himself in hot water over comments he made in 2012, when he was host of a radio talk show and invited guests to debate a hockey player’s use of blackface when dressing as Michael Jackson for Halloween. Mr. Tory said at the time that he didn’t think it fit into the definition of racism. During the debate Monday, a man stood up with a speaker held over his head and played the clip out loud. Mr. Tory kept his gaze down until the man was led out of the room.

“I made a mistake at that time,” Mr. Tory said after the man had left.

Throughout the debate, Mr. Singh and Ms. Gebresellassi were cheered on by raucous applause, hoots and drums as they discussed their respective platforms. Both are stressing affordable housing and crime reduction in their campaigns, with Mr. Singh offering a 10-point plan to reduce violence and Ms. Gebresellassi stressing free transit as a human right. Mr. Singh, a criminal-defence lawyer and activist, said he first ran for city council in 1997 out of a concern over growing disparity between communities, either those who engage with politics and those that didn’t.

“We know that strength is our diversity, but we haven’t seen diversity at city council,” he said. His violence-reduction plan includes a freeze on suspensions and expulsions within Toronto’s public and Catholic school boards, a point which Mr. Tory agreed with on Monday night. Mr. Singh also called for more accurate identifications of the causes of gun violence rather than using the label of “gang violence.”

Ms. Gebresellassi returned to points she criticized Mr. Tory and Ms. Keesmaat over at a previous debate, including the hiring of 200 new police officers and the portion of the city budget currently allocated to the police service. She has repeatedly asked both candidates to withdraw their support from the new hires.

“To be very clear, my plan is about re-establishing safety in our city,” Ms. Keesmaat said, saying that she wanted more police personnel trained in responding to mental-health crises. She said right now, there were only five communities in Toronto with specific local policing plans in Toronto, and pledged to have 140 during her first two years in office. Mr. Tory refuted that, saying that 10 more community plans were announced this week. He stressed restoring trust in police, “in a way where I think the onus falls on the police first.”

Canada Border Services Agency, a federal authority, also came under question in the municipal debate, with Mark Brown from the Coalition of Black Trade Unionists asking about disparities between how Canadians are treated if they bring guns across the border versus Americans caught driving into Canada with undeclared firearms. As of two years ago, more than two-thirds of guns used in crimes in Canada could be traced back to the United States.

Mr. Tory responded that border officials should be tougher on Americans, and if the United States was going to indefinitely block anyone who had used cannabis from entering the U.S., Canada should do the same for any American caught crossing with a gun. 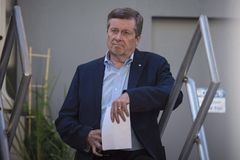