A judge has dismissed an application by homeless individuals and their advocates to allow encampments in Toronto parks during the pandemic.

The group – which includes 14 people living in encampments and two activist organizations – sought an interim order to allow the homeless individuals to stay in parks until a constitutional challenge of a city bylaw is heard.

The bylaw bans living or camping in parks after midnight.

Justice Paul Schabas said the group hasn’t met the standard of establishing harm to the public interest that would justify suspending the city’s ability to enforce its bylaw.

“The sweeping relief sought would unjustifiably tie the city’s hands in dealing with encampments that raise serious health and safety concerns for an indefinite duration, and would unduly prevent the use of parks by others,” Justice Schabas wrote in a decision released Thursday.

Hundreds of men and women have left shelters since the pandemic began and have been living in encampments that have sprouted up across the city.

The city has also made a significant effort to rehome thousands who used the shelter system by buying or leasing more than 30 buildings and hotels since the spring in an effort to reduce the spread of COVID-19 among the homeless.

Derrick Black, one of the men involved in the case who lives in a tent in Moss Park, said he was disappointed in the decision.

“We will keep fighting, but we are worried about being kicked out now,” he told The Canadian Press.

The group argues that evictions from encampments during the pandemic violate the rights of the homeless, while the city argued the Charter of Rights and Freedoms doesn’t entitle members of the group to live in parks.

The group’s lawyer, Selwyn Pieters, said he will await instructions from his clients about whether to continue the fight in court.

“We are obviously disappointed that we did not get the injunction we were seeking on behalf of our clients,” Mr. Pieters said.

While the judge sided with the city, he said his decision was based on evidence gathered in the summer, when COVID-19 cases had been low.

“To be clear, in dismissing the motion I am not directing the city to enforce its bylaws and to remove encampments in city parks,” Justice Schabas wrote. “That will be up to the city.”

The case revolved around 14 men and women who were living in several encampments in the city, including in Moss Park, Trinity Bellwoods Park and Allan L. Lamport Stadium Park.

The group argued it wasn’t safe to stay in the city’s shelter system and sought refuge in park encampments.

The situation has at times led to standoffs between the homeless and their advocates as city staff tried to clear the encampments.

In court, the group said those living in encampments have been subject to shows of force by city officials and police.

It also said many spots offered to the homeless by the city are in hotels or apartment buildings far from the services they need, including food and mental health services. 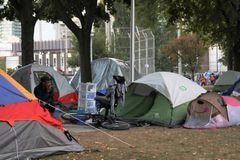 Midtown Toronto residents set to protest new homeless shelters
August 11, 2020
Report an error
Due to technical reasons, we have temporarily removed commenting from our articles. We hope to have this fixed soon. Thank you for your patience. If you are looking to give feedback on our new site, please send it along to feedback@globeandmail.com. If you want to write a letter to the editor, please forward to letters@globeandmail.com.
Comments