A little white box, the size of a kitchen cupboard, with a glass door sits atop a post in Melissa Rafael’s front yard in Toronto. Sometimes, people stop by to stock it with food and sometimes visitors leave with some boxes, cans or toiletries tucked in a bag or under their arm.

Ms. Rafael erected her Little Free Pantry about two years ago as part of an increasing movement to help neighbours struggling with food insecurity. Several such pantries have already popped up around Canada and while they do offer some relief to those unable to afford a meal, some say it isn’t the most effective way to feed the hungry.

“I wanted something simple that you can access any time,” said Ms. Rafael, who needs to refill her pantry more frequently depending on the time of year – sometimes as often as once a day. She buys some of the dry goods and toiletries herself, and puts out calls on neighbourhood social-media groups for donations from others.

The inability to afford food is a problem for many people living in Canada.

Chris Hatch, chief executive of the charitable organization, said those numbers have remained relatively stable over the years.

“It’s not getting better is the bottom line,” he said.

Some blame lies with the cost of food. Researchers estimated food prices will rise between 1.5 and 3.5 per cent this year, according to an annual report, with vegetables outpacing all other categories with a 4 per cent to 6 per cent anticipated jump. Meanwhile, food purchased from stores rose in price 4 per cent from May, 2018, to May, 2019, according to Statistics Canada’s most recent data, with a 16.7 per cent jump in fresh vegetable costs.

Jessica McClard started the Little Free Pantry project with a pilot pantry in May, 2016, in Arkansas outside of her church to help tackle food insecurity in her area where she said there’s a lot of hidden need.

The Little Free Library project served as her inspiration. The non-profit organization started in 2009 with a miniature replica of a single-room schoolhouse storing books for others to take for free. The “take a book, leave a book” concept has since increased to over 80,000 little libraries in 91 countries, including Canada, according to its website.

She felt that could be a good model to eliminate some of the shame people may feel around needing help.

“Everybody goes up to the project the exact same way – whether you’re putting food in or taking food out. So no one knows what position you’re in,” she said.

Ms. McClard stocked the pantry with diapers, cereal, peanut butter, feminine hygiene products and other toiletries and food items. She snapped a photo, shared it on social media and watched the interest increase.

Now, there are more than 650 such pantries in several countries, including several in Canada, according to a map on the project’s website. But that only includes pantries where the steward added their pantry online, and Ms. McClard believes there are many more she doesn’t know about.

Most of Ms. Rafael’s neighbours and passersby react positively, she said, and she’s even received thank-you notes from folks who have relied on her pantry in the past.

One or two naysayers expressed concerns over the possibility of the pantry drawing ill-intentioned people to the area, she said, but nothing bad has ever happened.

But not all experiences have been so positive. The Harmony Church in Brantford, Ont., shuttered its pantry after about a year and a half, Ruth Bond said in an e-mail.

Vandalism played a role in that decision, Ms. Bond said, adding the door was ripped off its hinges twice.

But the congregation also couldn’t keep up with demand and felt they couldn’t monitor equitable distribution of donations, she said, with reports of one woman stopping by every night to fill up her cart with the pantry’s contents. The congregation now sends its food donations to the local food bank instead.

At least one Canadian food bank in Mississauga put up a little pantry to help people access food during off hours, Mr. Hatch said.

“Having another source of food for those that need emergency food, it can’t hurt,” he said.

But these types of pantries are still relatively rare, he noted, adding he’s only aware of the one in Mississauga, a city of more than 700,000 people, according to the 2016 census.

“It’s not going to – I think – give them the quality of the food, the frequency of the food that they typically need that you get out of a full-service food bank.” 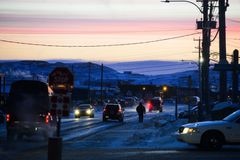 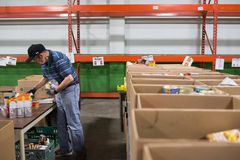