Diane Ford, the mother of Ontario Premier Doug Ford and his late brother Rob, the former mayor of Toronto, was the matriarch of the dynastic, headline-generating family that has loomed over the city’s politics for more than a decade.

The wife of one-term Ontario Progressive Conservative MPP Doug Ford Sr. – who founded the family’s label-printing business, Deco, and died in 2006 – Mrs. Ford was the guiding force of her tight-knit clan, which came to dominate Conservative politics in the city’s west-end suburb of Etobicoke.

She was thrust into the public spotlight when defending her son Rob during his fraught term as Toronto’s mayor from 2010 to 2014, which was marred by his alcohol addiction and drug use, his erratic behaviour and his ultimate admission after months of denials that he had smoked crack cocaine.

After a battle with cancer, Mrs. Ford died in her home on Jan. 5, at the age of 85. Cancer had also claimed her husband, who served under Ontario premier Mike Harris from 1995 to 1999, and her son Rob, who died in 2016. She leaves her sons Doug and Randy; daughter, Kathy; and 10 grandchildren.

For years, she opened her large suburban backyard to the family’s “Ford Fest” political barbecues attended by thousands. After her husband’s foray into politics, she advised her political sons – and her grandson Michael Ford, the Premier’s nephew and a former school trustee who is now a city councillor. Friends and relatives say she took charge in times of family crisis, both personal and political.

When she felt Rob got too “heated” at city council, she would call right away to “give him heck,” she said in the Premier’s 2016 memoirs, Ford Nation. Her influence even extended to the decor in Rob’s office as mayor, Doug’s as Premier and Michael’s office at City Hall.

It was in her basement that her son Doug – a one-term Toronto city councillor who had taken over Rob’s 2014 mayoral re-election campaign after he was waylaid with cancer – launched his 2018 bid for the leadership of Ontario’s PC Party, which would propel him into the premier’s office just months later.

In an interview, the Premier called his mother an “iron lady,” and an indispensable part of the family’s political machine: “I have never seen anyone with a résumé that [she had]. She was unofficial chief of staff for a school trustee, for two city councillors, for an MPP under Mike Harris – my dad – a mayor and a premier.”

Mrs. Ford always offered him valuable advice and support, he said. Last year, as his new PC government ran into controversies over various issues, he says he came to the family home and vented to his mother.

“I said, boy this is pretty tough, and this and that,” the Premier said. “And she goes, ‘That’s what you signed up for. Get back in there and keep going.’ ”

Mr. Ford said his mother’s battle with cancer intensified in the past few months. Just last June, she played host to a party for Toronto consuls-general from countries around the world, he said, and danced with her guests by the backyard pool.

He praised her openness and generosity. When he was a child, the Premier said, his mother opened the family home to take in his two cousins, who lived there after his father’s sister died. After Doug Sr. returned from a trip to Morocco, she agreed to board a visiting Moroccan-born student for a few days – only to have him stay for years and become part of the family, Mr. Ford said.

She was born Diane Ruth Campbell in Toronto in October, 1934, and her father was a manager at a company that worked on power plants, Globe and Mail reporter Robyn Doolittle recounts in her 2014 book, Crazy Town. Diane met Doug Ford Sr. – who was a year older and had grown up poor with a single mother in the city’s east end – while he was lifeguarding at a midtown Toronto pool in the early 1950s.

As recounted in Ford Nation, Doug Sr. offered Diane a ride home from the pool on his motorcycle, but promptly wiped out. According to family lore, he checked his bike for damage before attending to his passenger. Despite this and initial objections from Diane’s father, the pair began dating, and married in September, 1956.

Their first child, Kathy, was born in 1960, followed by Randy in 1962, Doug in 1964 and Rob in 1969. Doug Sr. had worked a variety of jobs before founding Deco, with a business partner whom he would later buy out. The business flourished and in 1970, the family moved into a large new, ranch-style home on Weston Wood Road in Etobicoke that would later become their political headquarters.

In Ford Nation, the Premier says he signed up his father to run for the local Ontario PC nomination before the 1995 provincial election to get him out of house. He had stepped back from running Deco and was spending more time at home, the Premier said, where he would yell at the TV about Bob Rae’s NDP government, and was “driving my mother crazy.”

Members of the Ford clan say there was little doubt who was in charge. In 2003, when now-mayor John Tory launched his first unsuccessful bid to lead the city, he sought the Fords’ blessing and met the entire family in a boardroom. Both Doug Ford and Mr. Tory remember Mrs. Ford doing most of the talking. And as Mr. Tory retold the tale to city councillor John Filion for his 2015 book, The Only Average Guy, it was she who offered the clan’s support – but only for a while, until it was “Robbie’s turn.”

It was only during the darkest days of Rob’s time as mayor that Mrs. Ford came into the public eye. Even after her son had publicly admitted to smoking crack cocaine in one of his “drunken stupors” in November, 2013, Mrs. Ford and her daughter, Kathy, told local news channel CP24 in a sit-down interview in her home that Rob was not a drug addict or an alcoholic.

Mrs. Ford did say she had laid down the law for him at a family meeting, urging him to “smarten up,” get an alcohol detector in his car and seek counselling. But she still said her heavy-set son’s issue was primarily a weight problem. Six months later, after Rob sought addiction treatment, she said she hadn’t known the extent of her son’s struggles with alcohol and drugs.

In Ford Nation, she said that finally realizing the truth of Rob’s behaviour was devastating: “I blame the media for a lot, but Rob was also stupid. I hate using that word, because overall he was not a stupid man, but he did stupid things.”

Long before Rob’s very public problems and his untimely death from cancer at 46, which left her shattered, Mrs. Ford faced other family crises. In 2005, Kathy – who has acknowledged her own issues with drugs – was shot in the head, but survived. In 1998, her ex-husband shot and killed her then-boyfriend.

Kathy’s son, Michael, says his grandmother has always been closely involved in his life, and that she encouraged him to run for school trustee and city council, even working with him on his speeches. He also praised her charity work with the Rotary Club and Easter Seals.

“She’s been more of a mother figure to me,” Michael said in an interview. “She always supported her family, no matter what, but if there were challenging times, if she had a different opinion, she would let you know about it.”

Her funeral, first announced in a PC Party e-mail to supporters, is scheduled for Saturday morning at the Toronto Congress Centre, the same venue in Etobicoke where thousands attended a celebration of Rob’s life four years ago. The Premier said everyone was welcome and that former premier Mr. Harris would be among the speakers.

Former Etobicoke mayor Doug Holyday, a family friend and political ally since the 1990s, served as a Toronto city councillor after amalgamation and as deputy mayor when Rob was mayor. He said Mrs. Ford had a great sense of humour and was the glue that kept the family together.

“In a family with personalities like the Fords, it was important to have someone like Diane in the group to keep the ship steady,” he said. “… And certainly, she wanted to let them know what she thought – and she did.” 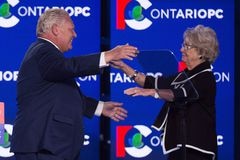