Two men behind a free Toronto newspaper that promoted legalizing rape and denied the Holocaust occurred were found guilty on Thursday of promoting hatred against women and Jews.

Opinion: Using the law’s hammer against Your Ward News was a mistake

Mr. Sears, 55, the editor-in-chief and St. Germaine, 77, the publisher, had argued Your Ward News (YWN) was meant to be satire but Justice Blouin found nothing funny about what was printed. If what they were doing didn’t amount to willful hate promotion, the judge said, nothing would.

“YWN repeatedly and consistently dehumanized Jews and women,” Justice Blouin said in his ruling. “Both men were fully aware of the unrelenting promotion of hate.”

The men, who will have a sentencing hearing April 26, face a maximum six months in custody and/or $5,000 in fines for each of two counts of willfully inciting hatred against an identifiable group.

The prosecution indicated it would likely be seeking a jail term but had yet to decide whether it would do so and whether it might ask that any jail terms run consecutively.

Observers said they could not recall another instance of a conviction for promoting hatred against women. Prosecutor Jamie Klukach said outside court that obtaining the guilty verdict was difficult, because the level of intent the Crown had to prove was “extremely high.”

Mr. Sears, who has two convictions for sexual assault from 1991 and who lost his medical licence in 1992 for sexual misconduct with three women, called the hate law “arbitrary” and the prosecution “politically motivated.” Comparing himself to a persecuted Jesus, Mr. Sears said he plans to appeal and keep on publishing.

“Two-thousand years ago, a man very similar to me was hauled up on hate-speech charges by the Pharisees and he was crucified subsequently,” Mr. Sears said outside court. “The same thing is happening today and I’m prepared to be crucified.”

An unrepentant Mr. St. Germaine was more subdued when asked for his reaction to the possibility he could end up in jail.

“I got nothing to say to you,” he said. “Whatever happens, happens. I’m not in control of the situation, the judge is. No regrets at all.”

At trial, the prosecution argued Your Ward News, with a circulation of about 300,000, mostly in and around the Toronto area as well as an online presence, was filled with “vile and degrading” articles and imagery.

Prosecutor Robin Flumerfelt told the trial the publication – 22 issues from the start of 2015 to the summer of 2018 were scrutinized – demonized feminists as “dangerous people” and called women “tri-orficed chattels.” The paper branded most feminists as “satanists exhilarated by abortion,” claimed women are inferior, and that feminism encourages rape.

The paper also repeatedly claimed the existence of a worldwide, blood-thirsty Jewish conspiracy. The imagery depicted Jews as devils with serpent tongues and reptilian hands, argued Jews were behind the 9/11 terrorist attacks and that the Holocaust was a Jewish myth to strengthen their control of the world.

“These are examples of the communications that the defendants made available to hundreds of thousands of homes without being asked,” the prosecution told court.

Sears’s lawyer Dean Embry had tried to argue that the courts should not criminalize anti-feminist sentiment. The publication, Mr. Embry said, took aim only at some women and some Jews, and while it may have been offensive and gone too far at times, it didn’t advocate hatred or violence against those groups.

Justice Blouin, however, shot down that contention.

“To advocate rape and proclaim women to be less than human has no basis in reason,” he said. “That hate propaganda could contribute to violence is starkly relevant today.”

Noah Shack, with the Centre for Israel and Jewish Affairs, said the ruling sent a clear message that hate mongers would be held accountable.

“Your Ward News has been peddling anti-Semitic conspiracy theories, misogyny, homophobia, and racism,” Mr. Shack said in a statement. “We can preserve free speech while protecting Canadians from those who demonize and slander entire communities.”

The federal government has barred Canada Post from distributing the publication. 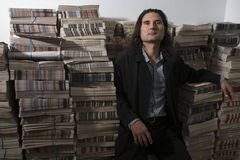