Dundas Street in Mississauga seems like an unlikely place for an experiment in urban design. This stretch of road is about as suburban as it gets. Strip malls, gas stations, parking lots and fast-food joints flank the broad avenue. Subdivisions spread out on either side. The car is king, the pedestrian a mere afterthought.

Mississauga hopes to change all that. The edge city just west of Toronto is planning a major overhaul of Dundas that would make it more welcoming to pedestrians and cyclists, more efficient for transit riders and generally more urban in scale and feel.

The Dundas Connects project is part of a broader push to urbanize the suburbs. It is under way across North America, and the cities that surround Toronto are leading the way. From Markham to Vaughan to Barrie, they are striving to check sprawl, expand public transit and build denser cores with more active street life.

Mississauga is further along than most. Its leaders had an epiphany some years ago: The city could not go on sprawling forever. For one thing, land was running out. For another, sprawl is expensive. It costs a fortune to build and maintain all those roads, sewer lines and hockey arenas.

The city’s famous mayor, the wildly popular Hazel McCallion, saw her sleepy rural community grow into a suburban giant during her four decades in office. Its population grew threefold to nearly three-quarters of a million, most of it spread out among low-rise residential neighbourhoods. Critics called her the Queen of Sprawl.

In her final years in the mayor’s office, she turned over a new leaf. She welcomed high-rise buildings to the city centre, including the curvaceous “Marilyn Monroe” condominium towers. She lobbied senior governments to approve more public transit, including a light-rail line along the city’s north-south spine, Hurontario Street.

The Dundas plan is the latest evidence of Mississauga’s changing outlook. The street began as a rural highway that passed through mile upon mile of farmland. When subdivisions started going in on either side, malls, commercial plazas and gas stations came along, too. Today the street is a busy thoroughfare of four to six lanes. The sidewalks tend to be narrow. Most of the buildings are set back from the street, often fronted by parking lots.

It’s lively and functional in its way. Food of every type and national origin is on offer, along with the usual range of nail bars and dentists’ offices. But it’s not lovely and it is certainly not walkable. Not a single pedestrian was in sight one recent afternoon at the big intersection where Dundas meets Mavis Road. Tattered plastic bags and other trash decorated a slope beside the street.

Planners want to put in wider sidewalks, better landscaping and separated bike lanes. They want a bus rapid-transit route with its own lane so buses don’t get caught in traffic. They want more and better parks throughout the 17-kilometre Dundas corridor. They want to stitch together the wandering street network so it is easier to get from A to B. They want more “active frontages” – buildings that face the street, rather than stand back from it, creating a livelier streetscape.

Most of the new development expected for the strip will be directed to seven nodes. At two of them – at Hurontario and at Dixie, near the Dixie GO Transit station – buildings of up to 25 storeys could rise. Others are likely to see buildings of five to 12 storeys. In time, the corridor could accommodate 50,000 new residents and 10,000 more workers.

None of this means that the old Dundas is going to disappear. The planners recognize the value of the thriving businesses that line the street. “We want to protect that, not wipe it out,” says Shonda Wang of SvN Architects and Planners, the firm that helped put the plan together. In any case, she says, “this is not going to happen in one go.” It’s a phased development that will roll out over 25 years and more.

But Dundas will evolve and that’s a good thing. Just as it went from rural highway to suburban thoroughfare, it will enter a new life as one of the busy main streets of a growing suburban city. Mississauga’s population is expected to reach one million by mid-century. To cope with all those people, it will need to change the way it grows.

Whether we can reinvent the suburbs for the 21st century is one of the most important questions facing modern cities. Transforming streets like Dundas is a part of the answer. 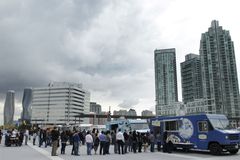 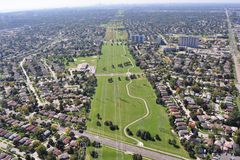 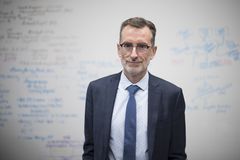