Toronto’s municipal election is set to proceed with a 25-ward map imposed by Ontario Premier Doug Ford, after a panel of appeal judges sided with the province and froze a lower-court ruling declaring his intervention in the Oct. 22 vote unconstitutional.

While the decision appeared to put to rest much of the uncertainty swirling around the municipal vote, it has prompted several of Mr. Ford’s opponents at city hall to wonder what other designs the Premier – a former councillor and failed candidate for mayor – has for Canada’s largest city. It has also set off a series of intense political battles for local council seats, pitting incumbents against one another in new, larger wards.

Toronto’s fight with Ontario has higher stakes than the size of a municipal council. The city encompasses more citizens than most provinces, and its financial sector is an engine for the broader national economy.

Explainer: Everything you need to know about Toronto’s election

The unanimous decision by a three-judge panel of the Ontario Court of Appeal allowed Mr. Ford’s Progressive Conservative government to back off its rush in the legislature to pass Bill 31, which would use the notwithstanding clause to override the Charter of Rights and Freedoms and cut Toronto’s city council almost in half.

“I’m feeling real positive,” said Mr. Ford, who was in Washington for a briefing on trade talks. “I’m very grateful for the court’s decision.”

The appeal court’s ruling reinstates Mr. Ford’s Bill 5, which was originally passed on Aug. 14, 3 1/2 months into Toronto’s election campaign. The bill redrew the city’s council map and cut the number of wards to 25 from 47. On Sept. 10, an Ontario Superior Court judge ruled Mr. Ford’s intervention in the election violated the Charter’s free-expression guarantee.

The stay granted on Wednesday by the appeal court is not a final decision in the case. But the province’s appeal will now not be heard for months, long after the vote. The city clerk said nominations for the new election would be reopened and accepted Thursday and Friday. 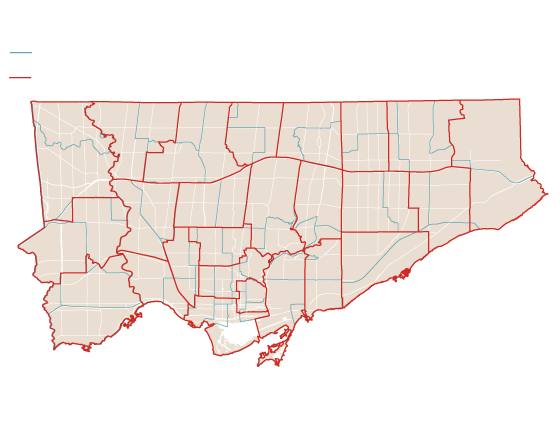 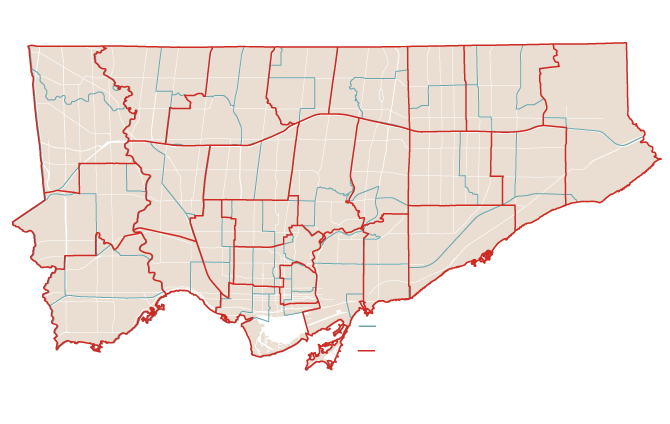 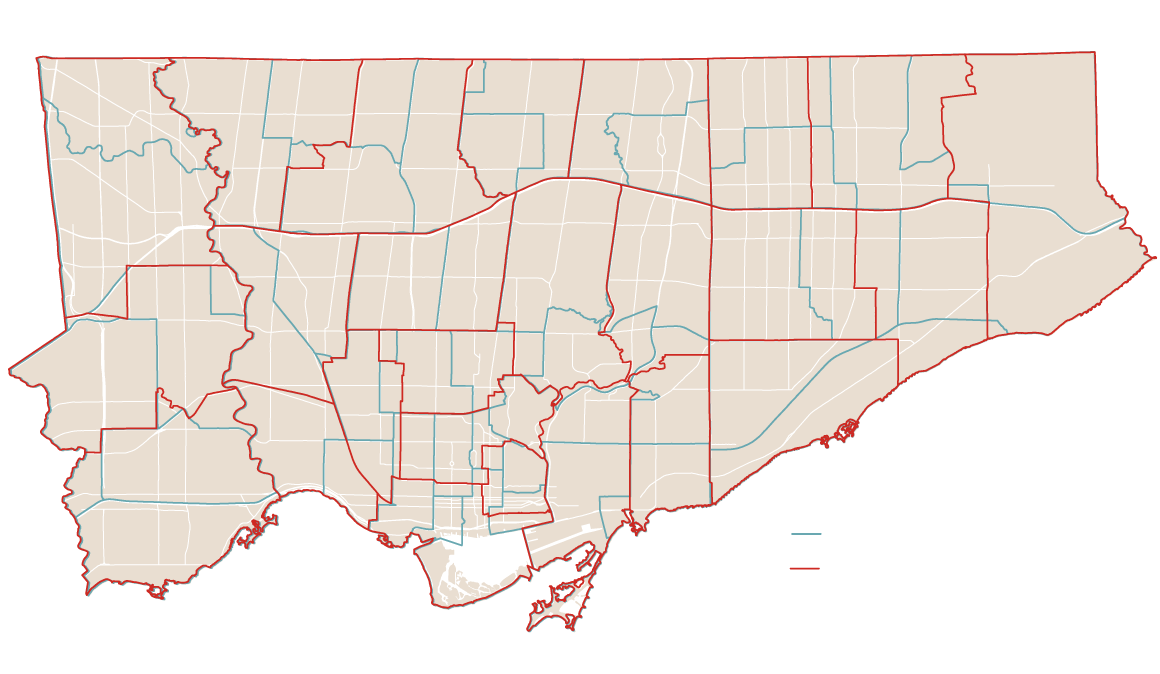 TRISH McALASTER / THE GLOBE AND MAIL; SOURCE: CITY OF TORONTO

Lawyers for the city and for the council candidates who challenged Mr. Ford’s Bill 5 in court were still mulling their next move. They could try to appeal the stay to the Supreme Court of Canada, but there is no guarantee the country’s highest court would agree to hear the case.

The Big City Mayors’ Caucus of the Federation of Canadian Municipalities, say the dispute should spark a national discussion over the role of cities, which are home to the vast majority of citizens live but left powerless in the Constitution’s division of powers.

Opinion: Despite the stay, there’s still no proof a smaller Toronto council will improve efficiency

While noting that the city’s lawyers have council’s authority to exhaust every legal avenue in their fight against Mr. Ford’s move, Mayor John Tory said on Wednesday he was not aware whether they would appeal the stay itself.

It could be the first of many battles to pit Mr. Ford against the province’s largest city, a looming conflict reminiscent of the 1990s, when the PC government of Mike Harris cut funding, downloaded responsibilities on the city and imposed amalgamation.

Mr. Ford’s government has already said it intends to take ownership of Toronto’s subway system. And during the tumultuous term that his late brother Rob Ford served as mayor, when the Premier was a city councillor, he pushed for a Ferris wheel and a megamall on the waterfront, where he also supported setting up a casino. In his 2014 run at the mayoralty, Mr. Ford also called for an end to the city’s land-transfer tax, on which the city relies heavily to balance its books. While a city councillor, he supported allowing jets to land at the island airport, something opposed by many residents on the waterfront and prohibited by a long-standing deal between the city, PortsToronto and Ottawa.//

Mr. Tory says he is prepared to work with the Premier as he has with other leaders: “Everybody’s different to deal with. But as I have said many times before, I believe that Premier Ford and myself have common interests in moving the city of Toronto forward and getting transit built.”

His chief rival for the mayor’s job, former chief planner Jennifer Keesmaat, charges that Mr. Tory failed to stand up strongly enough to Mr. Ford, noting that the mayor says he dismissed Mr. Ford’s mentioning of the idea of cutting council at a meeting in early July as just an offhand remark.

“He should have fought this vigorously then. The mess we’re in now is an outcome of that leadership,” Ms. Keesmaat said in interview at City Hall.

The Premier has suggested his opponents were only interested in protecting the jobs of downtown left-wing councillor “crony buddies” of NDP Leader Andrea Horwath. But some on council’s left predict incumbent members of city hall’s left-leaning wing will do fairly well in the 25-ward system.

“Quite frankly, I think progressive voices will [do well], it will just be a diminished number of all different sides of council,” Councillor Joe Mihevc said. “ ... It all depends on a few close races.”

But he and others say the cut in the number of councillors will cause problems for the way city hall functions. New councillors with larger wards will need to hire more staff, reducing dramatically the $25-million the Premier has said his reforms would save. The city will also have to scramble to sort out what to do with the seats normally filled by councillors on scores of agencies, boards and commissions, including the Toronto Zoo and the Toronto Transit Commission.

Meanwhile, the Ontario government acknowledged that Bill 31, and its use of the notwithstanding clause, will remain on the order paper, in case of a future setback in court.

With Mr. Ford in Washington on Wednesday, Stephen Lecce, his deputy government house leader, spoke to reporters at City Hall.

He repeated Mr. Ford’s assertion that a small council would save money and get more done, accusing Ms. Horwath and the Opposition of being more interested in “saving 20-odd political jobs at city hall” than in saving taxpayers money.

“We believe a smaller, more nimble government is in the public interest,” he said, calling the current council “dysfunctional” for voting on the $3.5-billion Scarborough subway eight times and spending “two full days” discussing a proposed ban on shark-fin soup.

With reports from Justin Giovannetti and The Canadian Press

Ontario Government House Leader Todd Smith and NDP Leader Andrea Horwath react after the Ontario Court of Appeal sided with Premier Doug Ford, granting a stay of a lower-court decision that declared his mid-election move to cut Toronto’s city council almost in half to be unconstitutional.

Ford government will not exploit override clause if stay is granted, provincial lawyer says
September 18, 2018
‘We will never, ever back down,’ Doug Ford declares as he presses ahead with plan to slash Toronto city council
September 17, 2018
Ontario MPPs to hold midnight session after failing to move Toronto council bill forward
September 15, 2018