Ontario’s Progressive Conservative government has issued a series of special orders to approve a handful of plans from prominent Toronto-area developers and quash any potential opposition, saying the projects are needed to help the economy recover from the COVID-19 pandemic.

Known as minister’s zoning orders (MZO), they allow Municipal Affairs and Housing Minister Steve Clark to make a final ruling on how a piece of land is used in the province with no appeals, such as those from citizens or environmental groups before Ontario’s Local Planning Appeal Tribunal.

In just over a year, Mr. Clark has issued eight new zoning orders, more than his Liberal predecessors did over their entire last decade in office. He issued four orders in one day alone last month, including one to okay the destruction of three small protected wetlands to make way for a large warehouse and distribution centre in Vaughan and another to allow a retirement community to be built on farmland in Markham and Whitchurch-Stouffville.

The Ford government started issuing MZOs last year, after it scrapped a contentious bill that would have allowed municipalities to request the right to pass “open for business” bylaws exempting local projects from various provincial rules, including environmental laws and those protecting the development-free Greenbelt area.

Some critics charge the moves are rewards for well-connected lobbyists and Premier Doug Ford’s PC Party donors. The directives, they say, unfairly circumvent the normal planning process and override the province’s own policies – and are being misused while public attention is focused on the novel coronavirus.

“It looks as though the provincial government under Doug Ford has found them to be somewhat of a magic wand that they can wave when their friends come calling for a special favour,” said Taras Natyshak, the Opposition NDP’s ethics and accountability critic.

Julie O’Driscoll, a spokeswoman for Mr. Clark, called any suggestion that political connections play a role “categorically false.” She said the orders are a way to cut red tape for key projects that will create jobs and housing. Each of these eight MZOs, she said, has been supported by votes from local municipal councils.

“These Minister’s Zoning Orders will help speed up the planning process so that municipalities can be ready, once the COVID-19 emergency declaration ends, to move forward on these projects,” Ms. O’Driscoll said.

In one of four MZOs issued on April 24, Mr. Clark approved plans from a group of developers, including Condor Properties and Robert De Gasperis’s DG Group, who have promised a $500-million, 2,000-job warehouse and distribution centre for a major retailer in Vaughan, north of Toronto, near Highway 400. The project, subject to a public hearing last June to which a council report says no one showed up, would require the destruction of three small but protected wetlands.

The developers, represented by lobbyist and former PC cabinet minister Frank Klees, have offered to create larger, enhanced wetlands nearby, with the blessing of the Toronto and Region Conservation Authority. But they say the province’s Ministry of Natural Resources and Forestry, which also supports the plan, does not have the power to lift the existing protections quickly.

According to a Feb. 27 letter from the developers to Vaughan’s mayor and council, Ministry of Municipal Affairs officials told the developers to seek council’s approval for a ministerial zoning order to speed things up. Council approved it on March 9.

In another order made last month, Mr. Clark gave the green light to plans by Flato Developments and Wyview Group to build a 500-unit retirement community on farmland that straddles the border between Whitchurch-Stouffville and Markham, north of Toronto. The land is outside the towns’ current settlement boundaries and would otherwise be subjected to a long review by the municipalities before any rezoning.

In a report submitted to the town’s council, Whitchurch-Stouffville planners say Ministry of Municipal Affairs and Housing officials came to them in February, looking for council approval before issuing a zoning order to okay the plans. Shakir Rehmatullah, Flato’s founder and president, gave Mr. Ford’s PC leadership bid $1,200 in 2018. Whitchurch-Stouffville council approved the plans in February.

In a third order also issued on April 24, Mr. Clark approved plans to allow hundreds of detached homes, townhouses, apartments as well as office space on land reserved for employment in Brampton, a project of prominent homebuilder and PC donor Silvio DeGasperis’s TACC Holborn Corp. The plans, which Brampton council approved in principle in 2018, were subject to a Local Planning Appeal Tribunal case launched by a group of other landowners in the city, which could now be rendered moot. Council approved a request for an MZO last September.

Other minister’s zoning orders allow for an expansion of Toronto’s Sunnybrook Hospital, long-term care homes and an auto-industry facility.

Some critics say they fear the government’s use of MZOs could poke holes in the protected farmland and countryside of the Greenbelt – which stretches across Southern Ontario and encircles the Greater Toronto Area – even though the Ford government has pledged not to touch it. (When video surfaced in the 2018 election campaign of Mr. Ford musing about handing Greenbelt land to developers, he recanted after a backlash and vowed to leave it intact.)

“Essentially, the more of this that happens, you have got the province taking over municipal planning," Mr. Gray said. “So it just becomes basically a conversation between lobbyists and Queen’s Park.”

Earlier this month, Richmond Hill council, north of Toronto, passed a motion asking for an MZO to rezone Greenbelt land near the Gormley GO commuter rail station to allow for industrial uses.

“We have been clear as a government that we will not touch the Greenbelt, so any MZO request for development that falls within the Greenbelt will not be considered or approved,” she said in an e-mail. 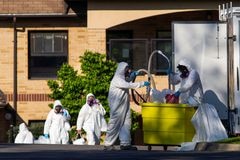