A Toronto man who tried to join Islamic State militants in Syria was sentenced to just over four years in prison on Thursday after a judge found he had taken responsibility for his actions and abandoned his radical views.

Pamir Hakimzadah, 29, pleaded guilty in early February to one count of leaving Canada to participate in a terrorist activity.

Justice John McMahon said Hakimzadah’s guilty plea, his age, his family’s support, the fact he didn’t end up joining Islamic militants and his commitment to participating in a deradicalization program were all factors in the man’s favour.

“Luckily for the accused, his family and Canada, he was arrested shortly after arriving in Turkey,” McMahon said. “He neither counselled others to join the organization, he didn’t actually join and has taken responsibility for his actions and didn’t continue to voice the same views.”

The Crown had sought a six-year sentence while the defence asked for a sentence of three years and seven months.

McMahon settled on a sentence of four years and one month for Hakimzadah, plus three years probation. After receiving credit for time already spent in custody, Hakimzadah will spend six more months behind bars, but is eligible to apply for parole in three months.

In September 2014, Hakimzadah told his family he wanted to go to Montreal to hang out with friends for a few weeks, according to an agreed statement of facts.

That was a ruse, court heard.

Before leaving home, Hakimzadah had displayed increasingly radical views, and had begun reading about the Islamic State militants and watching their propaganda videos, court heard.

On Oct. 22, 2014, Hakimzadah boarded a KLM flight to Amsterdam where he connected on another flight to Istanbul. He arrived in Turkey the following day.

He was travelling around Istanbul alone, court heard, and four days later a taxi driver turned him over to police. He was banned from Turkey for a year and in mid-November authorities sent him back to Canada.

“He did not turn back because he had a change of heart or decide it was the right thing to do: he was apprehended by a taxi driver who thought he was trying to go to Syria to join ISIS,” McMahon said, using another name for the extremist group. “Remarkably, he was deported back to Canada without notification of Canadian authorities.”

Hakimzadah, a former engineering student, later admitted to a family member that he had travelled to Turkey in an effort to join the terrorist group. He was turned over to police by a family member in 2016, court heard.

The defence had argued for a shorter sentence for Hakimzadah, saying he was committed to a deradicalization program and psychiatric counselling.

Hakimzadah’s lawyer told the court he had lined up two imams in Vaughan, Ont., who have been involved with deradicalizing members of the so-called “Toronto 18” group, which planned — but did not execute — a series of terror attacks in southern Ontario in 2006.

“He will be meeting with an imam from the Risalah Foundation to talk about the proper teachings of Islam and to reach a point of insight to see the path he went down,” defence lawyer Luka Rados said outside court.

The Crown had been dubious about the plan, but the judge agreed with the defence’s program and ordered it as part of Hakimzadah’s three-year parole period.

The judge said there were many other factors in Hakimzadah’s favour that helped lower the sentence. One included Hakimzadah telling court Tuesday he took full responsibility for his actions.

“I want you to know I will absolutely abide by any sentence that court imposes on me,” Hakimzadah had said. “I look forward to being reunited with my family.”

The judge cited Hakimzadah’s tutoring of high school students in science and math as another mitigating factor in the sentence, along with his charity work to help feed the homeless.

“I want to make sure you go down the civil engineering path,” McMahon said.

Hakimzadah nodded in agreement before being led out of the court in handcuffs. 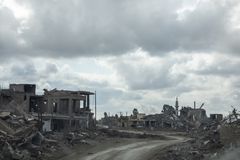 Ontario man pleads guilty to trying to join Islamic State militants in Syria
February 1, 2019
Report an error
Due to technical reasons, we have temporarily removed commenting from our articles. We hope to have this fixed soon. Thank you for your patience. If you are looking to give feedback on our new site, please send it along to feedback@globeandmail.com. If you want to write a letter to the editor, please forward to letters@globeandmail.com.
Comments