An Ontario judge has rejected a $1.7-billion attempt by taxi plate owners to sue Toronto over losses suffered after Uber entered the city.

In a recently released Ontario Superior Court of Justice decision, Justice Paul Perell ruled that Toronto had no legal requirement to shield owners of the plates from financial harm caused by the city’s actions.

“There is no obligation to protect the economic interests of those granted taxi licences,” Justice Perell wrote. “Legislative activities inevitably affect individual citizens; for some the affect is positive, and for others the affect is negative.”

By denying certification, his decision means the case cannot proceed as a class action. However, one of the three plaintiffs said they were mulling their legal options and are planning to consult their fellow members of a taxi industry umbrella group, which has been supporting the suit.

“Number one, we can appeal it, and we have 30 days to do that. Or we can … go at it in another way, as individuals,” said Lawrence Eisenberg, adding that the judge left plate owners “no choice” but to fight on.

“He said basically that the city can do anything it wants.”

Mr. Eisenberg owns three taxi plates while fellow plaintiffs Behrouz Khamza and Sukhvir Thethi have two and one, respectively. They argue that the city, having created the conditions that gave the taxi plates their value, should be held responsible for having changed the rules to allow Uber, thereby damaging their assets.

The plates, which are issued by the city and can be bought and sold on a secondary market, permit the owner to operate a taxi or to have someone do so on their behalf. City-enforced limits on the number of plates had long helped push up their market value, which at one point hit a high of around $380,000.

However, the advent of ride-hailing companies such as Uber Technologies Inc. increased the number of vehicles chasing customers and caused plate values to plummet. According to one industry veteran, they are now trading for $10,000 to $12,000.

Justice Perell’s ruling comes after years of turmoil in the taxi industry, which has been hit hard by the emergence of Uber and other ride-hailing companies. The industry, in many cities accustomed to operating in a protected market, has seen major losses. A number of cases of driver suicide, particularly in New York, have been attributed to financial problems.

Around the world, cities have struggled to manage these new transportation providers.

Canadian jurisdictions have taken different approaches. Vancouver has long been closed to ride-hailing companies, with British Columbia announcing only this month that it would permit them. The Quebec government is ready to compensate taxi plate owners who have lost money, although the industry wants more and has taken the government to court.

In Toronto, which failed in its attempt to get an injunction to stop Uber and eventually rewrote its regulations to allow ride-hailing, there has been no serious talk at city hall about compensation.

The plaintiffs alleged in their statement of claim that the city did not properly enforce its own laws and did not act to protect the value of their plates. They launched their attempted class-action suit last year, specifying damages of $340,000 for each of the 5,500 taxi plates issued by the city, and moved for certification in March.

The lawyer for the plaintiffs declined comment this week. A spokeswoman for the city of Toronto said in an e-mail that staff “will be reviewing the decision and determine next steps as appropriate.”

In his ruling, the judge noted that the plaintiffs had to meet a five-point test for certification. He determined that they had satisfied several of the criteria and he was quite harsh on some of the city’s arguments, calling one feeble and saying another “misses the target by the proverbial country mile.”

But Justice Perell ultimately ruled that the plaintiffs failed the part of the test requiring that there be a legitimate cause of action. 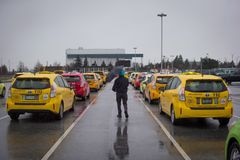 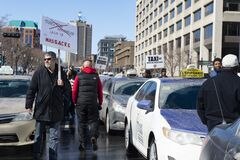