As the slippery ice and snow that began coating Toronto over the weekend wreaked more havoc around the city, the mayor came under fire for how the storm was handled.

Police closed off an area on Bremner Boulevard below the CN Tower to traffic and pedestrians on Tuesday because of concerns of falling ice in the area, forcing attractions such as Ripley’s Aquarium to close.

Steam Whistle Brewing and the Rec Room, businesses both located near the affected area, stayed fully or partly open on Tuesday night despite police listing them as closed in a news release.

On Monday, the Blue Jays were forced to postpone their game against the Kansas City Royals after a large chunk of ice fell from the CN Tower and punctured the retractable dome of the Rogers Centre. The team rescheduled their game to Tuesday, and it went on as planned despite Gates 1 through 6 of the centre being closed over ice concerns.

Elsewhere in the city, sidewalks remained covered or slippery into Tuesday for some pedestrians trying to make their way around. Citizens voiced their concerns on social media and directly to city officials.

“We have heard our residents’ frustrations with the ongoing efforts to clean up from this weekend’s ice storm and have raised those concerns with city staff,” Mayor John Tory and public works chair Jaye Robinson said in a joint statement on Tuesday.

City Councillor David Shiner, who represents Ward 24 in North York, said he complained to the mayor that major roads and sidewalks in his area remained covered with snow and ice. In a hallway at City Hall, he showed pictures taken on Tuesday on his smartphone of idle salt trucks and plows at a city works yard.

In their statement, Mr. Tory and Ms. Robinson said there needed to be a focus on the risk of flooding before removing remaining ice buildup on sidewalks and roads. They also said they’ll be “reviewing [our] response and how we can improve our services” and that they “look forward to any lessons learned …”

Mr. Shiner dismissed the mayor’s statement that the city would look at improving the way it handled the situation.

“I don’t know what we are going to look at improving, because the city had fantastic snow clearing except the decision was made not to send it out on Saturday when there was a huge accumulation of snow,” said Mr. Shiner, a member of Mr. Tory’s cabinet-like executive committee, who called the decision baffling.

He said residents have been bombarding him with complaints, and that he hoped to see answers from city bureaucrats, perhaps at the next council meeting, about how the call not to deploy all resources initially was made. And he said the lack of snow clearing was putting people in danger, describing how he saw pedestrians on Tuesday walking up busy Avenue Road to avoid an uncleared sidewalk.

“Making a guess in the middle of an ice storm that something might melt isn’t in my opinion a safe way to manage the streets of the city. And quite clearly, it was a huge mistake,” he said. “… There was no reason our crews should not have gone out.”

Thousands of Ontarians still without power in wake of weekend ice storm
April 17, 2018 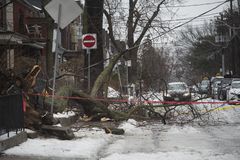 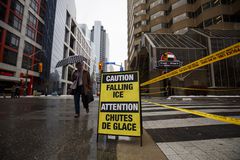