The Prime Minister has assured Toronto’s mayor that Ottawa will help his city cope with a surge of asylum-seekers into its shelter system even as a feud over the issue escalates with Ontario’s new Progressive Conservative government.

Mr. Trudeau quickly interjected: “We will be there for that.”

The Prime Minister, who is locked in battles with Ontario Premier Doug Ford over this issue and Ottawa’s right to impose a carbon tax on provinces, did not offer specifics on financial aid for Toronto – but gave assurances his government would help and praised Mr. Tory for his leadership on the issue.

“Canadians, we’re there for each other,” Mr. Trudeau said before the meeting. “We’re there for people in challenging situations and we know that we have to continue to demonstrate that our immigration system is strong and applies while staying true to our values.”

Toronto has more than 3,000 asylum seekers in its shelter system. They now take up more than 40 per cent of the spaces the city offers to homeless people. There are 800 refugee claimants − many of them families with children − temporarily housed in college dorms who are due to be evicted on Aug. 9, before classes return, and have nowhere to go.

Opinion: Conservative plan to get Trump to make a new deal muddies the waters around Canada’s asylum-seekers policy

Mr. Tory has said the effort has already cost Toronto $64.5-million, and has repeatedly demanded that the federal government, which is responsible for refugee policy, cover the bill. City officials say most have come to Toronto after crossing the U.S. border into Quebec, and many are from Nigeria.

Before the spring provincial election, officials with all three governments were working on a plan for the province to help co-ordinate the diversion of refugees from Toronto to other Ontario cities.

But this week, Mr. Ford said the federal government created a “mess” at its borders and should clean it up, and refused to pay to help settle the 5,500 asylum seekers who have arrived in Ontario in recent months.

After his meeting with Mr. Trudeau, Mr. Tory said he was encouraged by the Prime Minister’s support and by a conference call he held earlier with a group of other Ontario mayors, all of whom, he said, pledged to help Toronto. He also said he spoke with Mr. Ford on Thursday night, and remained hopeful the province can be persuaded to play a role.

In an interview with The Globe and Mail on Friday, federal Immigration Minister Ahmed Hussen underlined the importance of Ontario’s participation in the plans for the thousands of asylum seekers flooding the province.

“Temporary housing and housing in general is a shared responsibility between different orders of government, so we need Ontario to be part of this solution as we move forward to tackle this challenge,” Mr. Hussen said.

The minister said federal officials have tried to follow up with their Ontario counterparts since the Ford government’s recent comments, but have yet to schedule a time to discuss it.

Mr. Ford’s side showed no signs of backing down. On the second day of heated rhetoric between Queen’s Park and Ottawa, Lisa MacLeod, the province’s minister responsible for immigration, said Ontario was “at capacity.”

Ms. MacLeod, the Minister of Children, Community and Social Services, said Ottawa must endeavour to find federal buildings in the Toronto area to house “illegal border crossers,” and warned of a crisis if replacements are not found for the two college residences.

Ms. MacLeod, who blamed a tweet Mr. Trudeau made in response to U.S. President Donald Trump’s actions on immigration for the influx of asylum seekers, said Ottawa was being irresponsible: “There is an issue of responsibility, and to date from what I’ve seen, and I’ve only been the minister for seven days, there has been a lot of irresponsibility on the part of the federal government.” 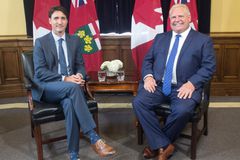 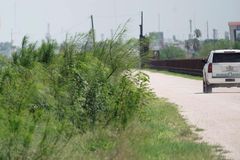 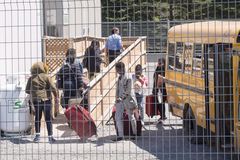